Scientific presentation of the research project

The ClimateFly doctoral project is part of a strategic axis that focuses on the consequences of climate change on air transport and its adaptation. The scientific community is strongly mobilized on the study of the climate impact of aviation. However, the impact of climate change on air traffic is little studied. For example, the performance of aircraft engines is impacted by an increase in ambient air temperature and the occurrence of heat spikes (IPCC 2013, IPCC 2018). Increased temperature and atmospheric humidity also tend to reduce aircraft lift, which impacts fuel consumption and maximum allowable takeoff weight (Coffel et al. 2015, Coffel et al. 2017). 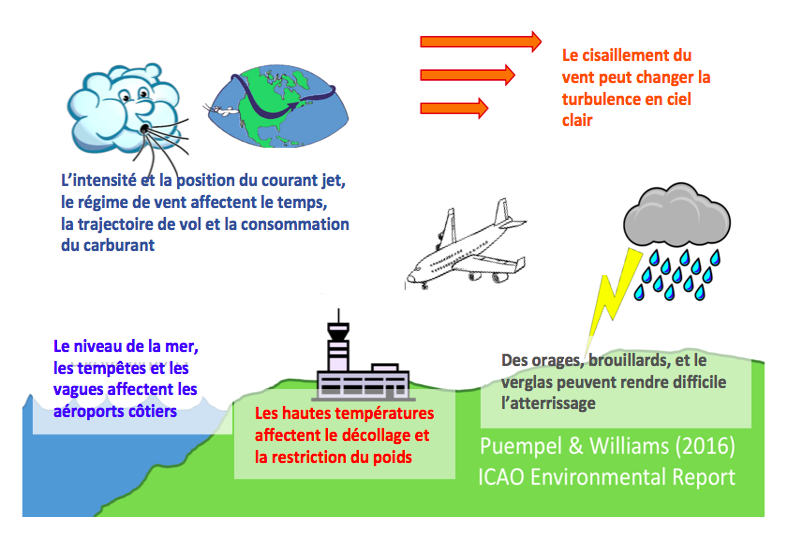 The ClimateFly PhD project is a follow-up to the RTRA ICCA (Impact of Climate Change on Aviation) project, which brings together research institutes and aircraft manufacturers to study the impact of climate change on commercial aviation. The project has two objectives: 1) to quantify the evolution, over the coming decades, of the number of days when an extreme temperature is reached on the ground (leading to a longer take-off distance and/or a restriction of the take-off weight) and 2) to propose adaptation paths to adapt aviation to climate change. Modeling the impact of climate change on air traffic is an extremely large task, which relies on modeling choices for the atmosphere and emission scenarios, as well as for aircraft aerodynamics and engine thrust. Each model is associated with epistemic and random uncertainties related to the models, the numerical solution of simplified physics equations, the data input to the computational codes, and the stochastic nature of some of the processes involved. Atmospheric variables evolve over time and according to emission scenarios, represented by imperfect climate simulations due to errors in model parameterization and forcings. The characteristic variables of the aircraft propulsion and aerodynamics are also represented by simplified numerical simulations that predict take-off and flight performances in an uncertain way. These uncertainties in the schematic subsystems are propagated by the numerical model and result in uncertainty in the outputs of the simulations (e.g., takeoff distance calculation or flight performance, criteria from which the aviation industry issues certifications and design choices). To translate the impact of climate change on the take-off distance of an aircraft, it is therefore not sufficient to carry out deterministic atmosphere-aircraft modelling by assuming an increase in temperature and humidity. It is essential to take into account the cascade of uncertainties associated with each subsystem, and to propagate these uncertainties in the modeling chain, via a set approach. The objective of the ClimateFly PhD project is to translate the uncertainties on the atmospheric variables impacted by climate change and on the engine and aerodynamic characteristics of the aircraft into a quantified estimate of the reduction of the maximum allowable load of the aircraft to satisfy the take-off phase. The configuration studied during the thesis will be representative of a current civil aircraft. 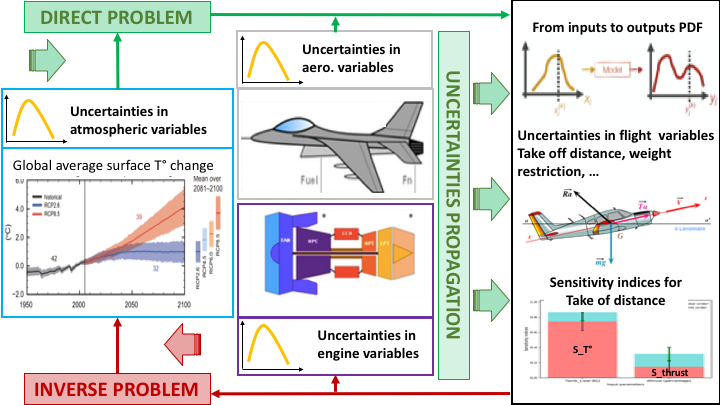 The ensemble propagation of uncertainties will allow to quantify, for example, a number of days of weight restriction in different regions of the world and for different levels of global warming: 1.5 and 2°C (target set in the Paris agreements), 3 or 4°C for more pessimistic scenarios (which must nevertheless be considered in a risk estimation approach). This approach has the advantage of presenting a synthetic result for the different emission scenarios and over the decades up to 2100. This so-called “direct” strategy will be completed by an “inverse” strategy which consists in identifying the values and uncertainties of the input variables in order to respect a constraint on the output variables. This project requires the mobilization of skills in fluid mechanics modeling (aerodynamics and engine performance) and in climate change modeling, which is why two teams are associated to supervise this thesis work: ISAE-Supaero (Department of Aerodynamics, Energetics and Propulsion) and CERFACS/CNRS (Climate Environment Couplings and Uncertainties team)

The work previously carried out by the CECI and DAEP laboratories on the sensitivity analysis of the take-off distance has highlighted the predominance of the temperature effect on the decrease of thrust and the increase of the take-off distance (Prado 2020), based on the data of the IPCC scenarios RCP2.5, RCP4.5, RCP6.5 and RCP8.5. The developments and conclusions of this study are a starting point for ClimateFly. Each of the two teams has a strong expertise in one of the 3 pillars of the PhD project: flight dynamics and performance for ISAE-SUPAERO/DAEP, climate change modeling and uncertainty quantification methods for CERFACS/CECI. These two laboratories are key players in the RTRA ICCA (Impact of Climate Change for Aviation) project since 2018.

The doctoral project benefits from the dynamics of the RTRA ICCA consortium, made up of academic and industrial aircraft manufacturers partners. In addition to the valorization of the project through scientific publications, which will participate in the influence of the region, ClimateFly should allow: 1) to recommend and validate modifications to adapt civil aircraft and make them more resilient to climate change (target: TRL 4) and 2) to develop useful knowledge for the training of future engineers and scientists, directly in the training provided at ISAE-Supaero and CERFACS, but also by relying on the Research Federation that includes ENAC, ONERA and ISAE-Supaero.

Skills in statistics, programming (Python) and fluid mechanics are expected for a M2 profile or engineering school. An interest in aviation, aeronautics and the environment is also desirable.