In compressors, corner separation is a frequent phenomenon occurring at the junction between the blade suction surface and the end wall. It can occur both in stators and rotors of compressor stages and has been one of the main phenomena that lead to compressor instabilities, hence impacting directly the operability margins of the engine. This complex 3D secondary flow is linked to the interaction of the hub boundary layer with the blade passage pressure gradients and can be impacted further by unsteady phenomena such as the laminar-to-turbulent transition, freestream turbulence, leakage flows etc. Simulating this highly complex phenomenon by solving the steady-state Reynolds Averaged Navier-Stokes (RANS) equations, the current industrial state-of-the-art method, is shown to lead to significant discrepancies in the predictions. Using a Wall-Resolved Large Eddy Simulation (WRLES) approach, inherently unsteady and capable of resolving the most energetic turbulent length scales in the main flow as well as in the thin boundary layers has been shown to capture the physics of corner separation well (PhD of F. Gao, LMFA 2014). However, the computational cost is prohibitive for more frequent industrial use. An alternative approach is to use a Wall Model (WMLES): the viscous part of boundary layer, responsible for the biggest part of the WRLES cost, is modeled, using an analytical or semi-analytical law-of-the-wall, while the rest of the domain is resolved. WMLES has already been proven capable to predict most flow physics present around blade profiles (without lateral walls). Nonetheless, the potential of this approach to capture accurately the far more complex corner separations has not been validated. The objective of this internship is to evaluate the capacity of WMLES and the mesh resolution requirements to predict correctly the corner separation of a simplified linear compressor cascade (NACA 65 profile), measured experimentally at the LMFA laboratory. 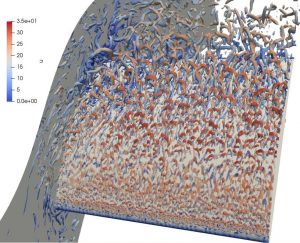 A previous internship has been carried out last year on this subject at Safran Tech, where RANS, WRLES and WMLES were compared. The main objective this year is to 1/ perform additional post treatments and especially on losses and 2/ use novel methodology to improve results as adaptative mesh refinement.

The candidate should have strong knowledge on computational fluid dynamics and ideally on turbomachine. A first experience on CFD and/or turbomachine would be greatly appreciated, as well as skill in programming (unix, bash and python).
Second, the candidate would ideally be interested in starting a PhD after this internship.

If intersted, please send a resume and cover letter to

We use cookies to ensure the best experience on our site.
If you continue to use the latter, we will consider that you accept the use of cookies. Check out our privacy policy I ACCEPTI REFUSELEARN MORE
Revoke consent