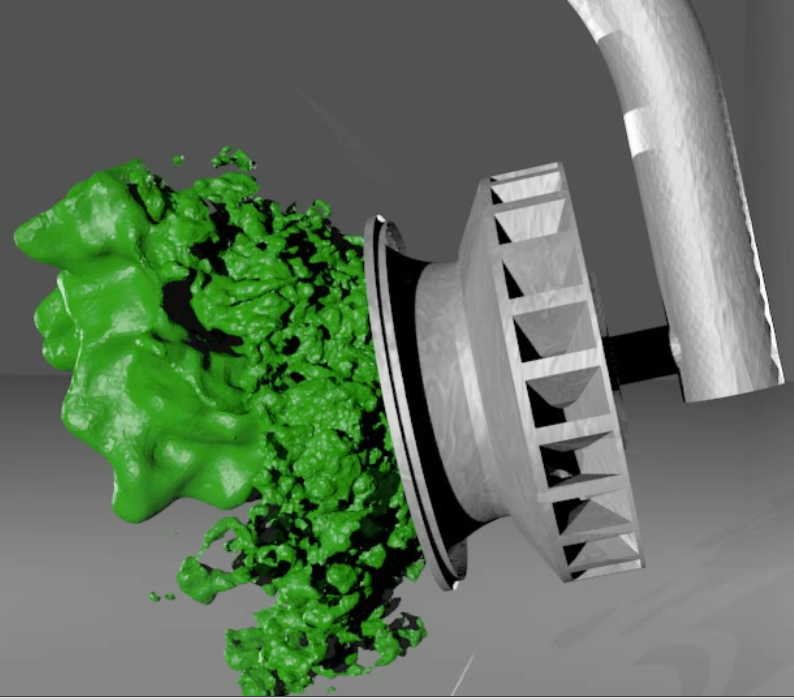 SUMMARY OF THE ERC PROJECT 'SCIROCCO':

Most renewable energies can only be delivered intermittently. Without massive long-term storage capacities, they will never provide 65 % of our energy mix by 2050, as required to limit global warming to 2°. Throughout this period and beyond, energy generation from combustion will remain a key component of this mix.

Objective (1) is addressed by extending ‘Power to Gas (PtG)’ strategies,where excess electricity from renewable sources is converted into fuel, usually hydrogen (H2), which is easy to store over long periods and burn when power is needed.

Objective (2) is addressed by burningthe ‘renewable’ H2 in smart combustors with higher efficiencies and reduced emissions. Today, H2 is diluted in methane lines ('drop-in' strategy) to burn in existing devices. This strategy ignores the exceptional properties of H2, which burns and ignites faster than all other fuels. We will exploit these properties in new chambers that (1) burn H2within a wide range of fossil fuel mixes and (2) use H2 as a powerful actuator to increase performance. Rather than diluting H2 in other fuels, we will inject H2 into the chamber separately. Research is needed to analyse the structure of these new dual-fuel flames that burn a fossil fuel and H2 simultaneously. This is a challenge for combustion science, requiring a re-think of chamber design and control.

These fundamental issues will be addressed for two applications with fundamental societal impact:

All cases will be studied experimentally (at IMFT) and numerically (with CERFACS simulation codes). SCIROCCO will develop fundamental knowledgeon multi-fuel flamesand have a direct societal impact as SCIROCCO burners will pave the way for smart combustors burning renewable H2.

The SCIROCCO project focusses on renewable energy storage usingsmartcombustion systems that burn hydrogen (H2). Recent work summarized by the IEA [25] shows that the contribution of renewable energies must increase to 65 % by 2050 in order to limit the mean global temperature rise to 2°C. This cannot be achieved without the capacity to store large amounts of energy generated from renewables, for which production is intermittent. In its technology roadmap, the IEAdemonstrates that the use of H2 as energy vector offers a solution to this problem [25]. In addition, it can significantly lower pollutant emissions compared to fossil fuel combustion. As part of this overall strategy, SCIROCCOaims to deliver two simultaneous objectives, each requiring significant research breakthroughs:

develop new combustion systems, or retrofit existing ones, in order to burn hydrogen that is itself produced by excess wind or solar power, therebycreating the opportunity to use renewable energy through high-capacity storage over virtually unlimited periods,

The overall proposition for SCIROCCO is simple: H2 can be producedusing various renewable energy technologies (eg. wind, sun, organic waste). It can then be stored for infinitely long timesand used later as a fuel in combustion chambers, thereby creating an elegant and efficient storage vectorfor renewable energies. Various projects aim to use combustion to store the “surplus” electricity produced by renewable energies when supply outstrips demand: 'Power-to-gas (PtG)' strategies are explored in European projects funded by the EU (HELMETH) or by industry (STORE&GO),for example. PtG approaches have multiple advantages [3], the main one being that they offer storage capacities and timesthat are far beyond other strategies (Fig. 1): PtG allows the storage of Twh-energies for several years. This massive storage capacity is critical in any scenario where renewable sources would become a major contributor to the energy mix. Today, other energy sources (usually fossil fuels) can compensate for the intermittent production of renewable energies because they represent a small part of the overall production. When their contribution grows, massive storage capacities will become mandatory: H2 can enable the storage needed to balance energy supply and demand, potentially enhancing overall energy flexibility. However, IEA points out that this still is a scientific challenge, where technologies are immature and significant research is required [25]. 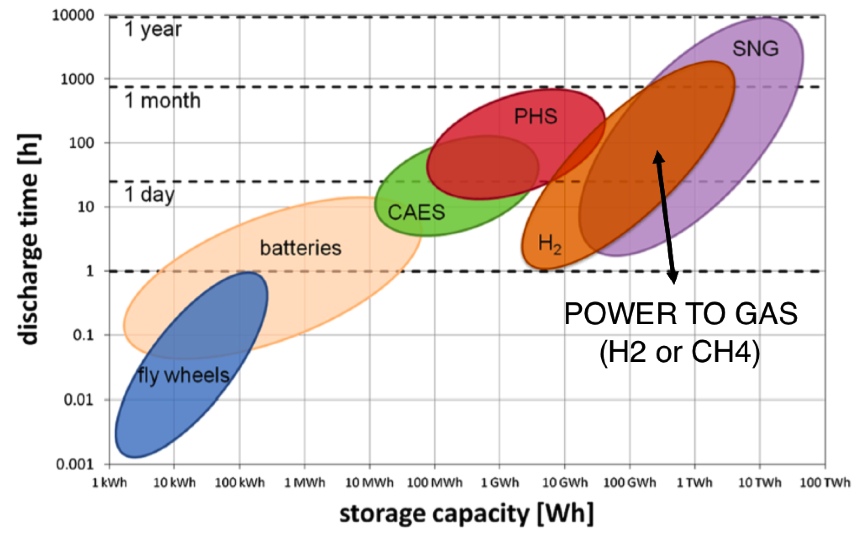 SCIROCCO focuses on the methods used in PtG strategies to recover energy from H2. One technique is to convert H2 into CH4through methanation [10]. Another is to oxidize H2in fuel cells for direct electricity production [25,26]. Alternatively, H2 can also beburnt to produce heat, work or electricity directly. This flexibility is allowed by the extremely high power density of fuels which is key to the current success of combustion devices and explains why H2 is also attractive for PtG. One approach to burning H2 is the 'drop-in' option, where H2is mixed with fossil fuels such as methane (CH4) to burn in existing chambers, albeit at low concentrations so that it does not affect the overall performance of the combustor. This drop-in strategy has limits, however, as pointed by a recent report [2]: H2is very different from CH4 and mixing them in proportions where the H2 content is not small (typically > 10 % in mass) leads to difficulties in terms of combustion performance and safety; H2 may also increase leaks, flammability and ignition limits, and promote explosions in systems which are not designed for H2 flames. As renewable energies grow, mixing H2  into CH4 networks will be limited and new alternatives to the drop-in techniquewill be necessary.

SCIROCCO proposes a new paradigm to burn hydrogen in an extended PtG scenario. Instead of mixing H2with fossil fuels, the approach is to exploit its extraordinary combustion properties and to inject it separately, directly into combustion chambers. This will allowincreased operability and performance.While it requires the redesign of combustors in order to inject fossil fuels and H2 separately (in the same chamber), it also opens novel possibilities. This approach, called here MFI (Multi-Fuel Injection), has two complementary objectives:

(1) burn hydrogen (as obviously needed in any PtG strategy) in chambers which will also be able to operate from pure fossil fuel to pure hydrogen, a crucial property for flexibility,

(2) take advantage of the extraordinary properties of hydrogen as a fuel to improve the performances of existing and future chambers, burning fossil fuel by injecting H2 in a smart way in order to reduce pollutant emissions, increase operability, decrease instabilities, etc.

This strategy combines advantages: it supports H2 as energy vector for renewable energy storage;it also provides a powerful control method for combustion chamberswhich remain difficult to control and optimize and would greatly benefit from the introduction of H2. Figure 2 shows an example of an MFI combustor burning H2 produced by electrolysis (from sun or wind sources [26]). Hydrogen injection in such a chamber opens a wide range of possibilities: H2can be injected, pure or diluted, anywhere in the chamber, steady or pulsed, split into multiple injections, used only during certain phases (ignition for ex), etc.  The topology of flames that will be created by such additional injections is a new field for the combustion research community and the objective of SCIROCCO is to explore these MFI flames, theoretically, experimentally and numerically.

Figure 2: example of MFI chamber fed by H2 produced by electrolysis. The 'renewable' H2 is used not only to burn in the chamber but also to improve its performances in terms of stability, ignition and emissions.

From the perspective of combustion science, the concept of MFI(injecting two separate fuels at different locations in a given combustion chamber) is almost new: existing chambers usually burn a single (fossil) fuel. Adding H2injection will change the overall performances (ignition, stability, emissions) drastically as shown in previous studies for piston engines or gas turbines [1, 4, 5, 6, 7]. SCIROCCO will focus on these possibilities, exploring the fundamental questions raised by this new type of combustion and especially the interaction of flames created by fossil fuels and hydrogen flames in the same chamber. This is still an uncharted field of research:  very few flames use MFI today because this makes chambers more complex to design and to operate. The SCIROCCO project assumes that the design of new chambers and the modification of existing chambers is inevitable and proposes to confront the design problem head-on, by investigating the corresponding gains and limitations of the approach.

In addition to MFI, SCIROCCO will also revisit and expand control methods for combustion. Control for combustion is not new [8] although we will not use the high-frequency active control techniques developed in the 90's, as the experience gained at that time has shown that these methods were expensive and difficult to industrialize. Instead, we will focus on passive control, using the power of H2 as a fuel, with the goal of building intrinsically stable and efficient flames without active control systems.

An interesting aspect of MFI techniques is that while the injectors of fossil fuels are virtually impossible to move within most chambers, additional H2can be injected anywhere in the chamber, although its optimal position and tuning are difficult to identify a priori. Unlike traditional studies that characterize a single combustion chamber configuration in great detail, we expect that hundreds of possible configurationswill be created and tested numerically and experimentally in the program: indeed, SCIROCCO will systematically and rapidlycombine experiments and simulationsin order to analyse the mechanisms controlling MFI flames and to investigate multiple configurations for H2injection. SCIROCCO’s target is to investigate a given configuration experimentally and numerically in less than two weeks in order to explore many possible implementations for H2 injectors. This will be made possible by using modular experiments, where 3D printing will be used to re-design elements within days, while simulations will use fast adaptive mesh generation and highly-optimisedcodesfor unsteady reacting flows (made available by CERFACS).

As a direct result of the above, an additional outcome of SCIROCCO will be the improvement of simulation methods for combustion problems of this type: the computations of MFI flames are still rare because most codes and models are not able to handle multi-fuel combustion precisely. Theoretical results on this topic are very limited because the mathematics is too arduous even in laminar configurations. Computational Fluid Dynamics (CFD) is the most appropriate method to analyse unsteady turbulent combustion in MFI chambers, and improving CFD tools will be a key objective of SCIROCCO. The starting point for this will be the DNS/LES solver AVBP of CERFACS, which is recognised as having world-class capabilities in the field (see intecocis.inp-toulouse.fr [9]). Fig. 3 also shows a literature search which clearly indicates that the capabilities that CERFACS can deploy on SCIROCCO are world-leading. AVBP is capable of performing DNS and LES of flows within highly complex chamber geometries, and can make use of massively parallel machines. High Performance Computing (HPC) will play a major role in the development of MFI technology and SCIROCCO will seek access to  some of the world’s most powerful supercomputers through initiatives like PRACE in Europe or INCITE in the USA where the CERFACS team has already won multiple grants for computations that require hundreds of millions of CPU hours.

Figure 3: Left: number of A-rank papers on 'LES' and 'combustion' referenced in 2013 and 2018 showing that this field expands rapidly and that the CERFACS codes used in SCIROCCO are references in the domain (source: web of science). Right: an example of full gas turbine chamber LES simulation with AVBP(instantaneous temperature field)

The need for both rapid experiments and efficient simulation tools explains why SCIROCCO brings together two teams in Toulouse: IMFT (CNRS) will provide the theoretical and experimental expertise, while CERFACS will use simulation tools that it has developed as a world leader in the field (Fig. 3); the CFD group at CERFACS brings the expertise needed for SCIROCCO that is not available at IMFT.