Our mesh-adaptation helper Tékigô is a wrapper to -hopefully- ease static mesh adaptations.

The difference from usual approaches is that Tékigô can rescale and mix several adaptation criteria before giving it to the mesh adaptation. In particular Global number of nodes and minimal mesh size are a priori controlled.

Basically, this is a python interface to a mesh adaptation implementation, looking like this:

To get the idea, read the first tutorial Cooking with tekigo, beginner level. Indeed Tékigô is a kitchen to cook your custom metrics. 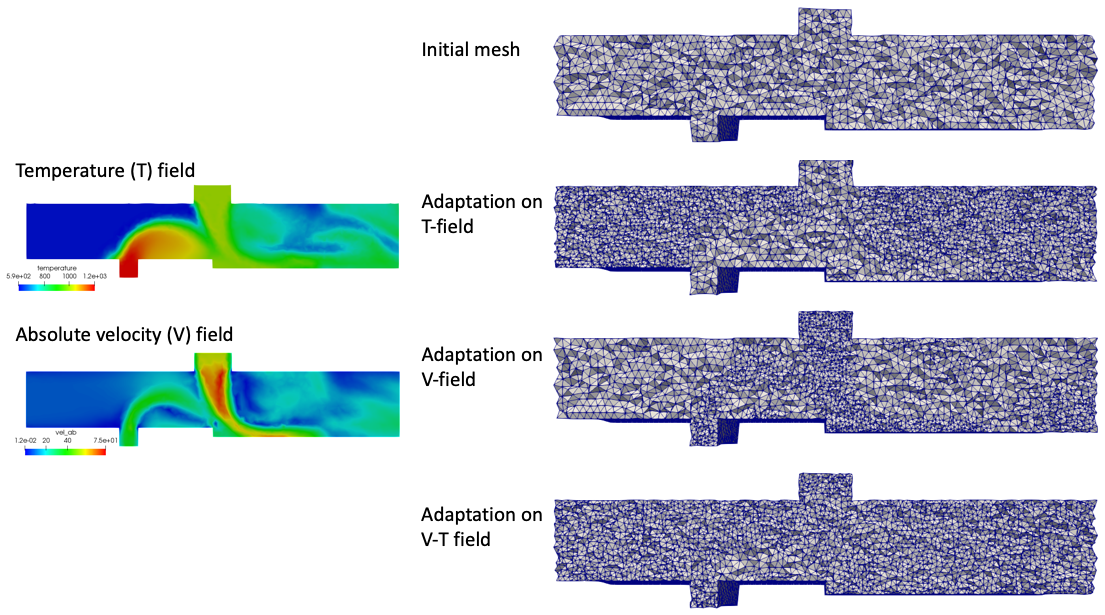 Up to doday (Aug. 2020) , Tékigô relies on meshes created by MMG library, interpolations are done with the software HIP. The process is sequential.

In the future, the metrics could be provided to other parallel pipelines, such as the Yales2/MMG flow. Be aware that in all mesh adaptators, there are three steps:

…and each of the step could be done by a different software.

The algorithm of Tékigô will be explained, but only after several definitions. To figure it out, the idea of metric field should be explained beforehand.

Fig.2 is an example of metric. Here metric is set to near 1.0 around the upper and lower inlets to less refine the mesh, and it is set to around 0.7 to refine more in the rest of the field. Metric can be definded based on a single variable as well as multiple variables to mix up as shown in Fig.1.

Fig.2 Metric on the temperature field of Fig.1

A field used to Flag a zone for mesh refinement/coarsening. Criterias are Used-defined fields known at each node of the mesh.

Criterias are normalized btw -1 and 1 to allow blendings.

Fig.3 inner iterative process process on the metric in Tékigô

The process described in Fig.3 doesn’t always give a mesh of the targeted node-number or a mesh refined as specified by metric field. Now if we call it “inner loop”, we have another one called “outer loop” in Tékigô as shown in Fig.4. This loop allows to get closer to the target node-number gradually with the iterative way. In each loop, Tékigô checks criteria such as L2-norm and max iteration number if it continues the refinement by the outer loop or not. L2-norm in this process basically means how similar/different to/from a mesh is when compared to its specified metric field.