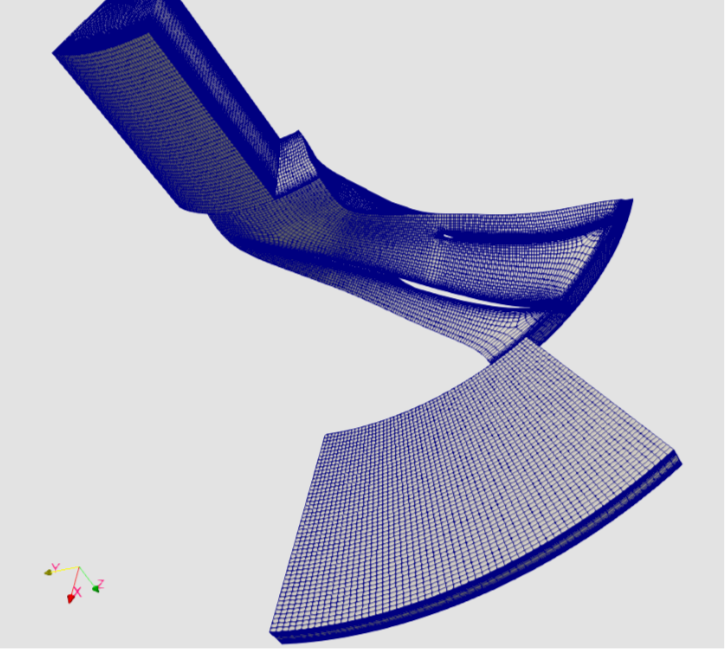 hip is a package for manipulating unstructured computational grids developed by J. Mueller. It was born in 1997 at CERFACS in Toulouse to convert structured multi-block meshes into unstructured ones. (In the following, the terms mesh and grid will be used synonymously, and if not specified otherwise will always refer to the most general notion considered here which is a hybrid unstructured grid.) From that, hip grew into a toolkit that:

HIP is a C mesh handler used at Cerfacs and University Queen Mary.

As often, 90 percent of HIP usages were limited to 10% of its features, and diffusion/installation of executables was a recurrent chore. The PyHIP package is therefore a python wrapper for HIP, distributed from PyPI, with a standard Unix Command Line Interface for the most common actions.

Install PyHIP from PyPI in your terminal:

Once installed, your terminal will feature the pyhipcommand:

You can also start the interactive CLI of HIP with interactive, or re-use your hip scripts with script.

The following features are exclusive to PyHIP: 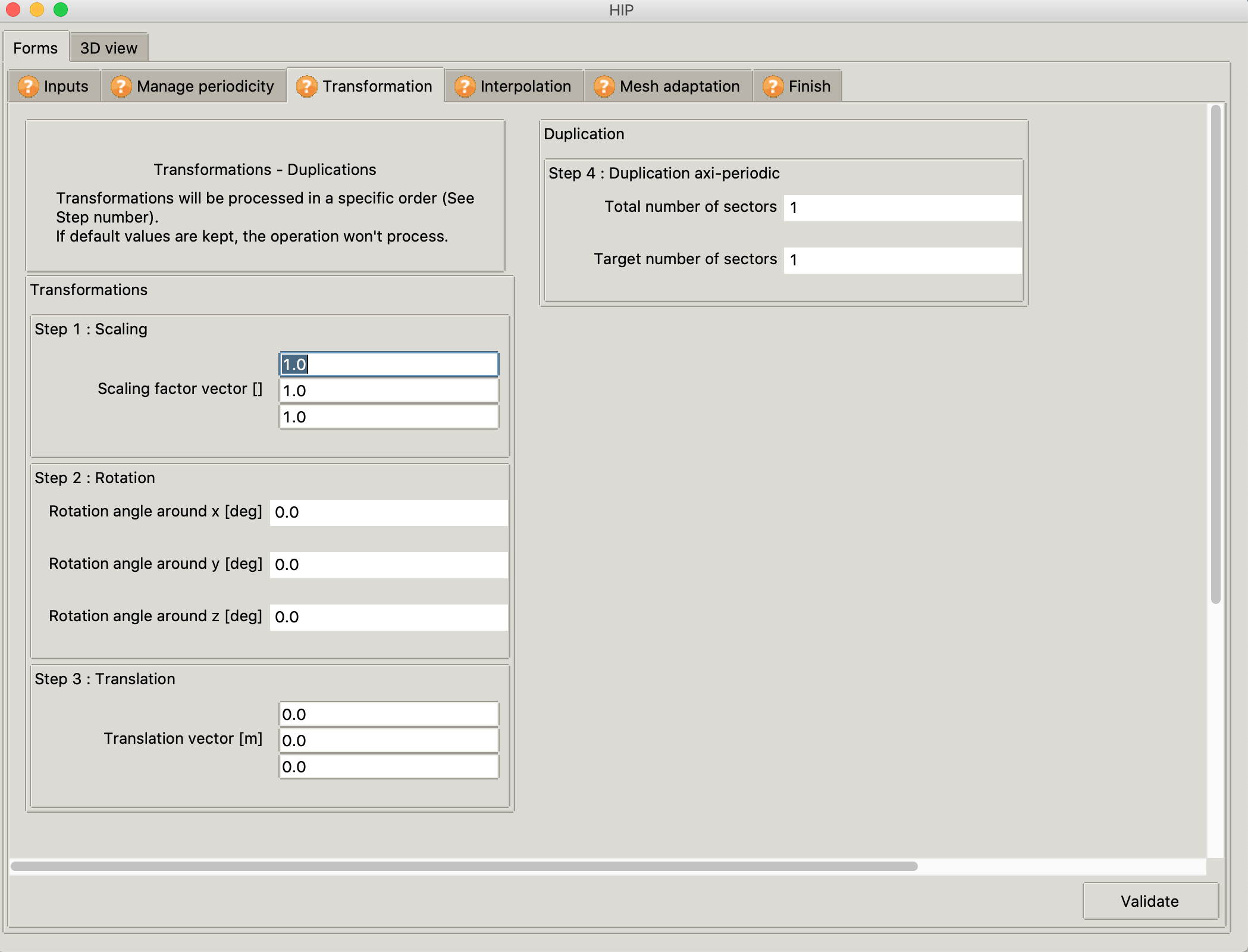 The PyHIP graphical user interface, base upon OpenTEA. Most of the features available though the command line can be prepared graphically. 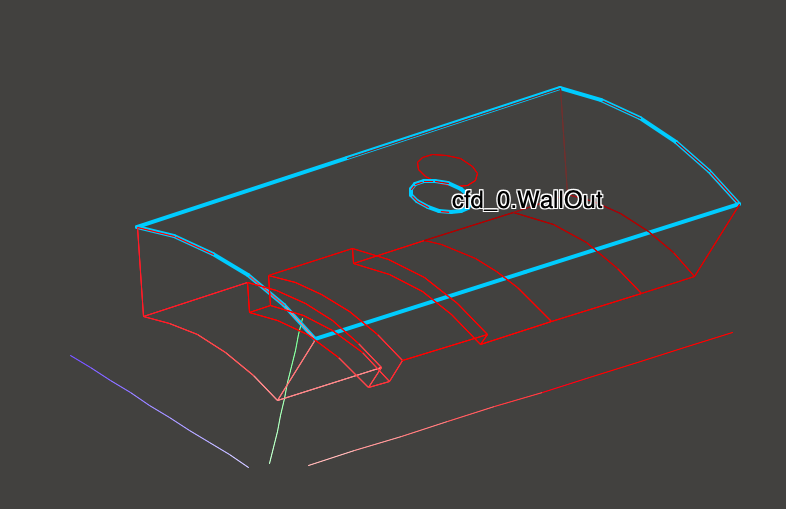 The view mode, to inspect the names of the patches on a geometry. The wireframe is also usable in Ensight or Paraview using the geo export option.

A typical ID card from PyHIP. This .pdf file is generated besides the mesh file .mesh.h5. This allows do “document” easily several versions of a similar configuration.

Yet another way to use pyhip is as a Python package. This may be useful if your workflow relies on Python scripts. The same tasks listed above can be accomplished within your script. To help you getting started, we will show how to create a simple mesh (and then make it slighter more complex), get mesh information, convert between mesh formats and coarse/refine your mesh.

Let’s start by creating an unit-length square with 9 elements in each direction: 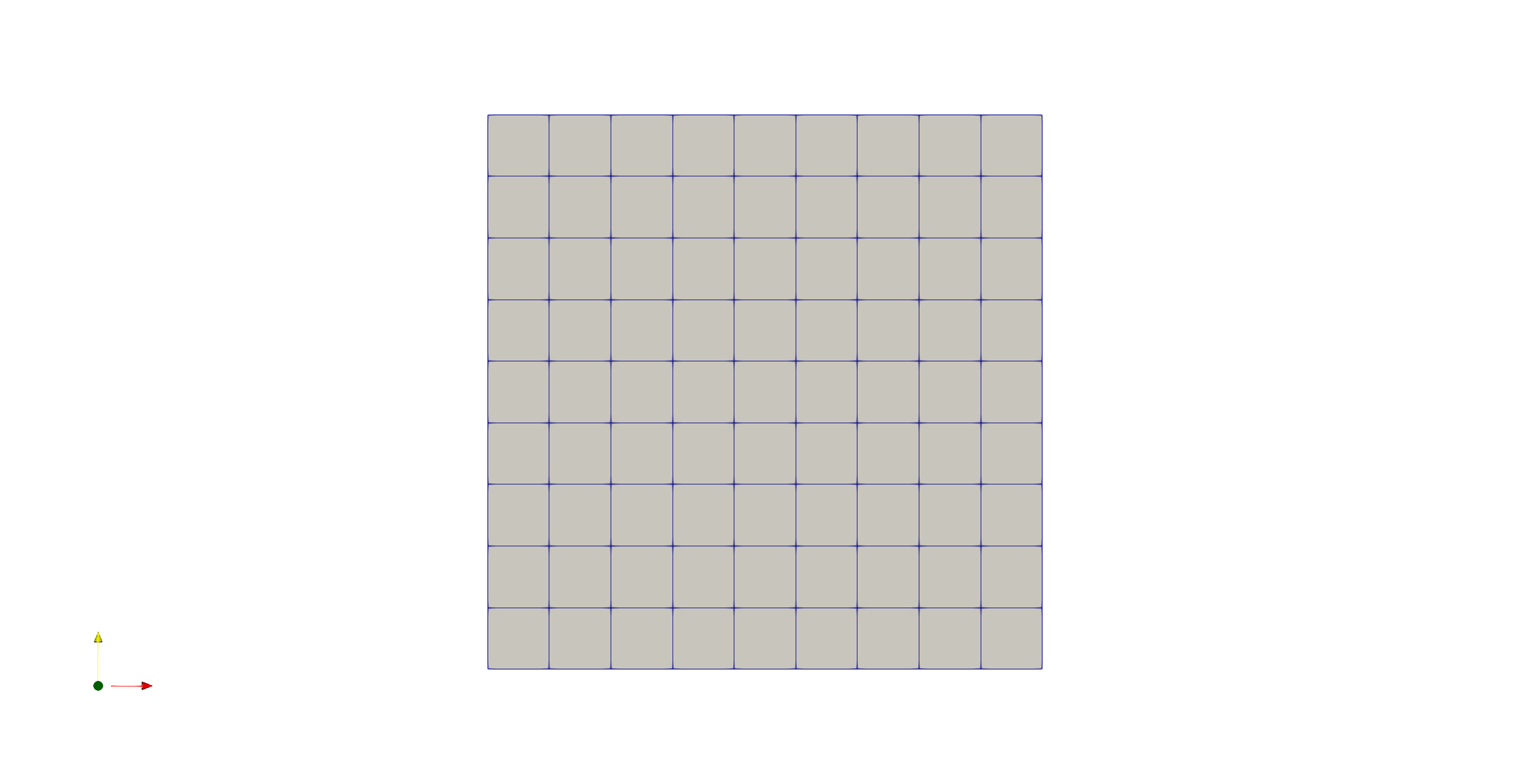 This code block generates a mesh with quadrilateral elements. To get a mesh with triangular elements instead, it is enough to change convert2tri = True. Notice resolution asks for the number of nodes in each direction, being the number of cells equal to \(n_{nodes} - 1\).

If instead, you want a 3-dimensional mesh, let’s assume a cube, you just have to specify the extrude axis, range and resolution: 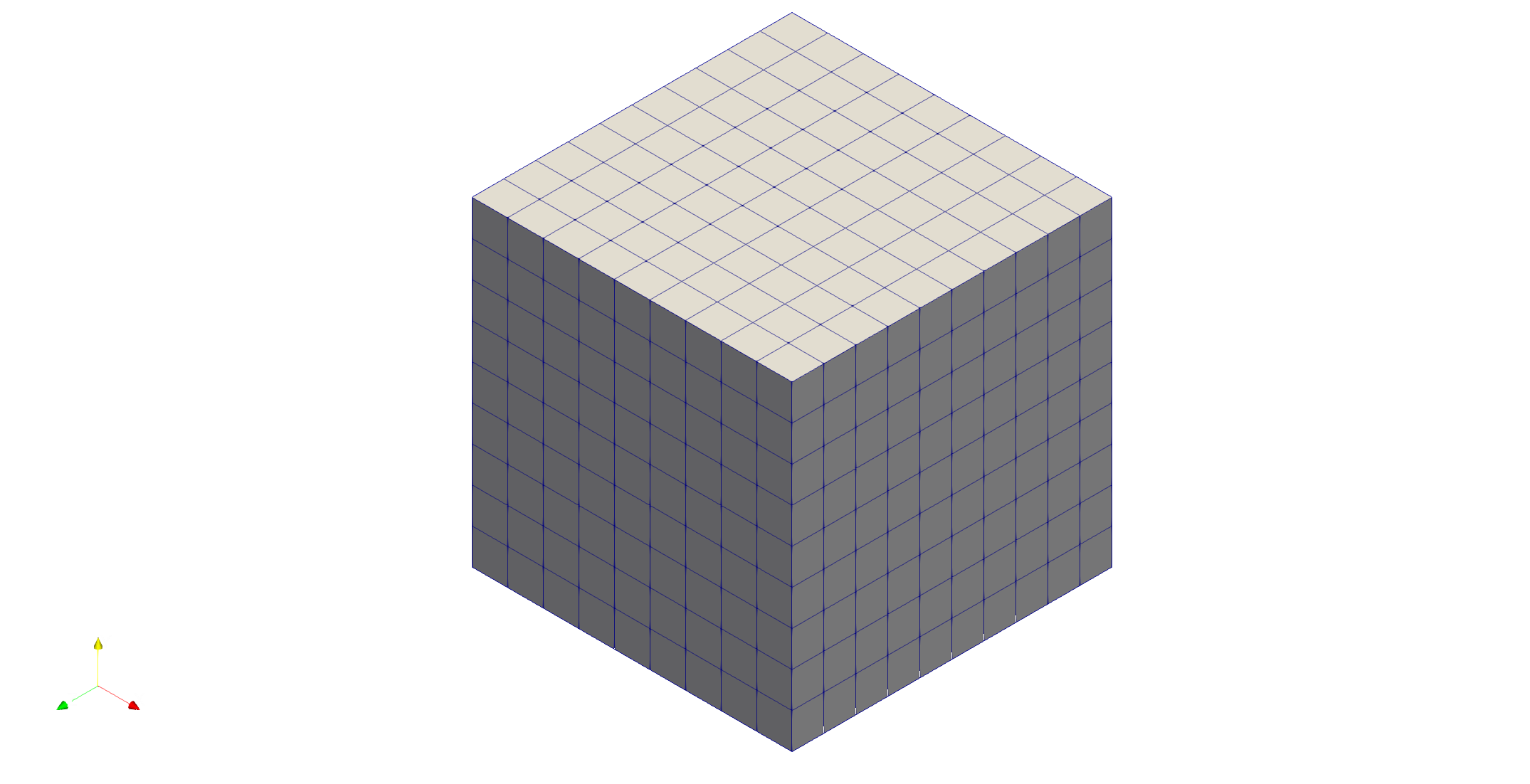 As in the 2-dimensional case, convert2tri controls the type of elements (hexahedral or tetrahedral).

More interestingly, you can create a cylinder using extru_axis = 'axi' and changing the range to extru_range = (0., 360.) (we also changed the resolution): 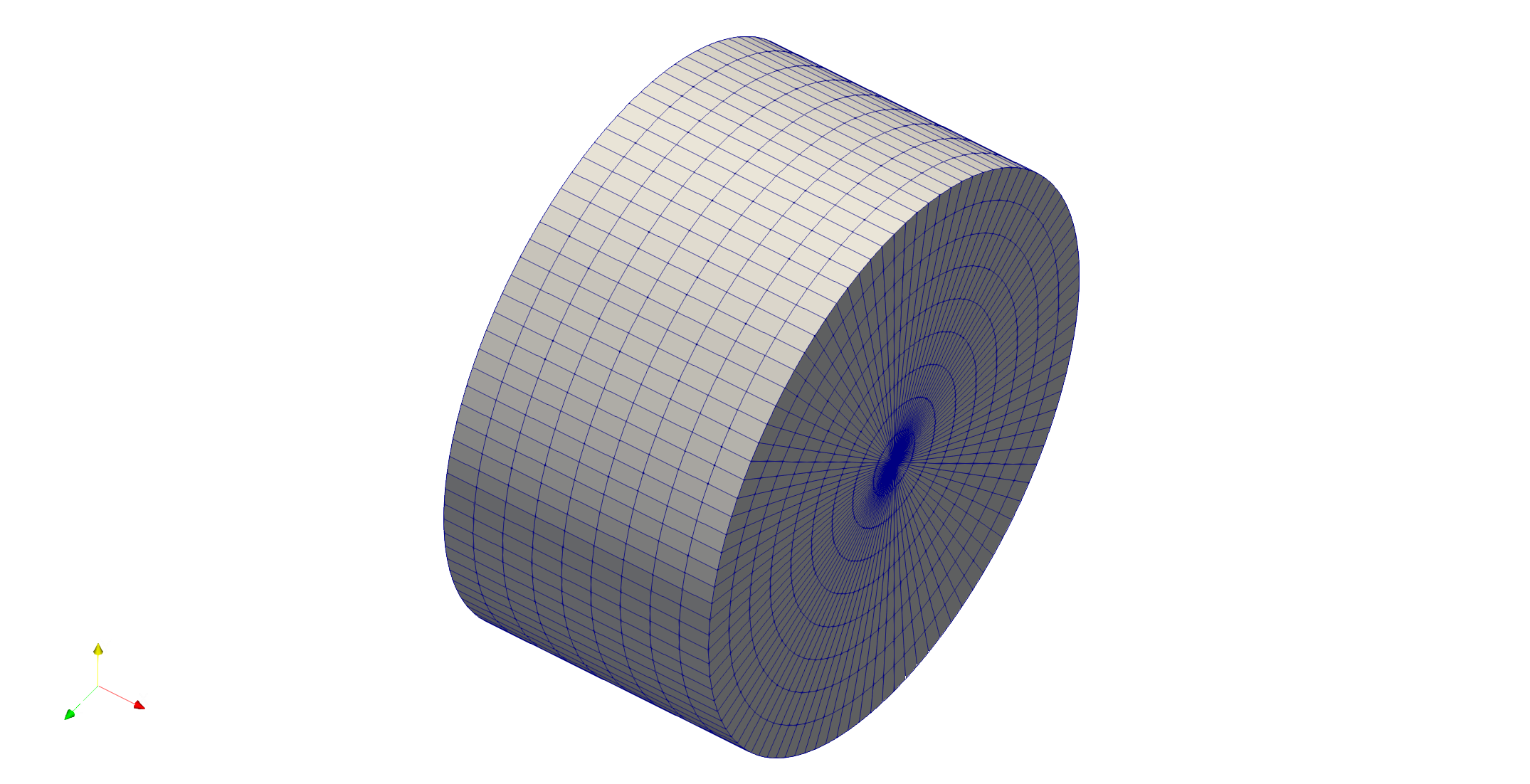 The other valid values for extru_axis are 'x' and 'y'.

To get information about the mesh, we rely on extract_hdf_meshinfo.

mesh_info is a dict that contains useful information such as number of nodes, boundary nodes and cells, and mesh quality metrics (edge length and element volume extrema). is_axi and ndim inform about axisymmetry and number of dimensions, respectively. patch_labels provides the name of the patches.

If you have the mesh in a format other than hdf5, you can convert it, as it is shown next.

A very useful feature provided by pyhip is the conversion between mesh formats. If the format you are looking for is not available, you can pipeline pyhip with meshio to create your own feature-rich converter (and everything is open-source!).

To have the code block above working between different mesh formats, you just have to use different readers and writers.

Finally, if you are performing convergence tests or simply playing with the impact of the mesh refinement in your simulations, then adapt_with_factor will be of great value to you.

This mesh adaptation works for triangular and tetrahedral elements only. A factor greater than 1 will coarse your mesh.

If you want to try out these examples with more complex meshes, please checkout out this repository.

Antoine Dauptain is a research scientist focused on computer science and engineering topics for HPC.
Luís F. Pereira is an engineer that enjoys to develop science/engineering related software.