TDL is a tool to predict the node-number of a mesh after a mesh-adaptation by MMG library.

CFD (Computational Fluid Dynamics) is a numerical study to simulate the behavior of a fluid such as air flow in an aircraft engine. In CFD, we describe a continous domain by scattered points as in the right in Fig.1. This is called discretization and the discretization domain is called “mesh”. The distribution of mesh points, also called “nodes”, largely affect the quality of the accuracy of simulation. MMG library is a tool to re-distribut the points to increase accuray. Fig.1 shows an example of an adaptation to a temperature field in the left of the figure.

Fig.1 Example of numerical mesh and its adaptation to a temperature field

Our mesh-adaptation tool Tékigô performs a mesh adaptation by a system based on MMG library. The difference from MMG library is that Tékigô can specify the target node-number after the adaptation and can mix up multiple conditions (ex. concentrate points on a lower temperature and high velocity zone).

In Tékigô, a variable called metric is defined at each node. This variable basically means how much you will increase the mesh at each node (ex. when metric = 2.0 is given on a node, this node will be devided into two nodes). Fig.4b is an example of metric. Here metric is set to refine the mesh outside of a flame (metric < 1.0) and coarsen the inside (metric > 1.0). MMG library integrated in Tékigô reads metric as input and refines the mesh.

Modification of metric by node-number estimation

We consider a variable called “node-density”. This is calculated by the inverse of the cell volume (cell-surface area, if 2D). The dimension of this variable is [number of nodes / unit volume or surface].

2. Interpolate to a Cartesian grid

The cell volume is defined at the center of gravity of a cell. To perform UNet-type Deep Learning, a rectangular image where each dots are distributed like a Cartesian-grid is needed. So the cell volume field will be interpolated to a rectangular grid. This is done by a simple command of Python griddata((xcell, ycell), dens_node, (X, Y), method='cubic') where (xcell, ycell) are x,y-coordinates of cells and dens_node is node-density field, (X, Y) are the coordinates of Cartesian-grid on which we interpolate. method='cubic' means the cubic method for the interplotion. Fig.4a shows the node-density field interpolated to a Cartesian-grid-like image. Here we take an example of an adaptation on a mesh the cell volume of which is uniform everywhere in its whole domain.

3. Prediction of the new node-density field

4. Estimate the node number by the adaptation

Calculate the integral of the predicted node-density field (Fig.5a-left). This gives the total number of the nodes. 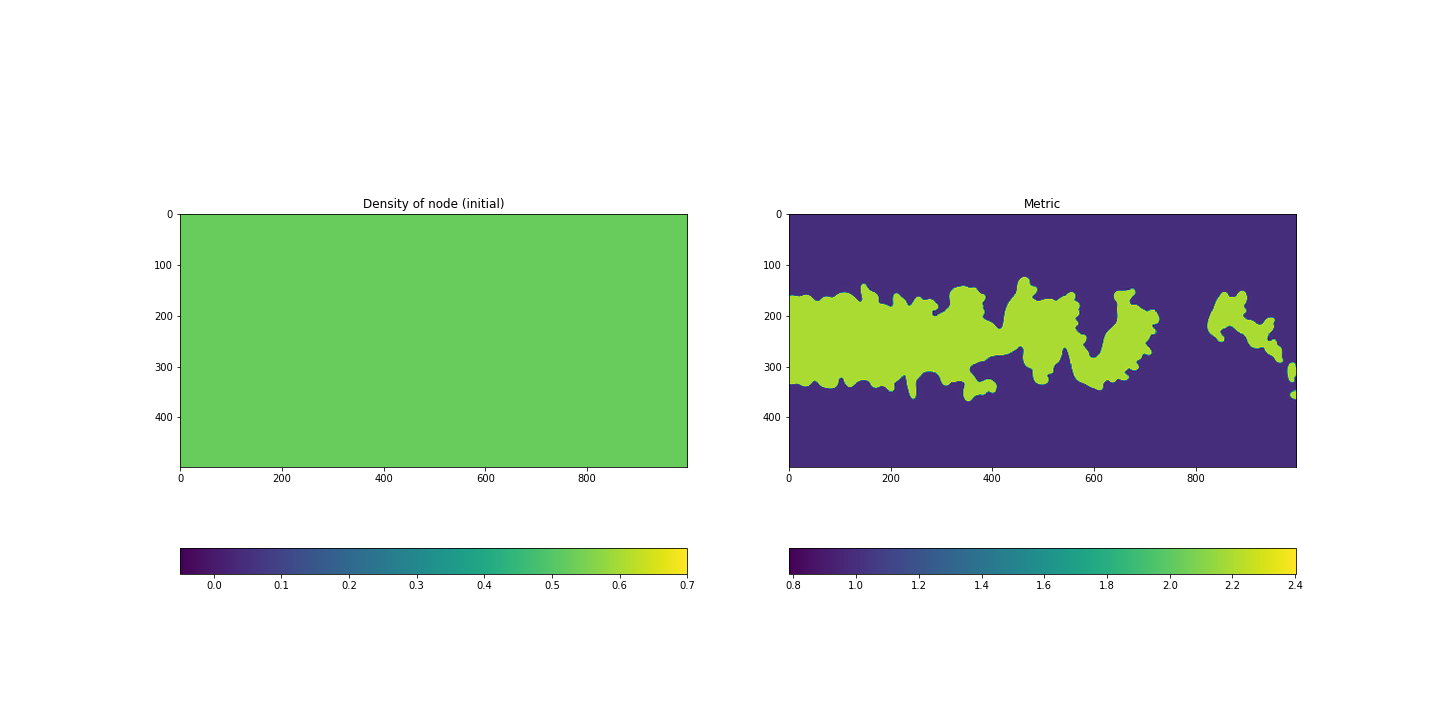 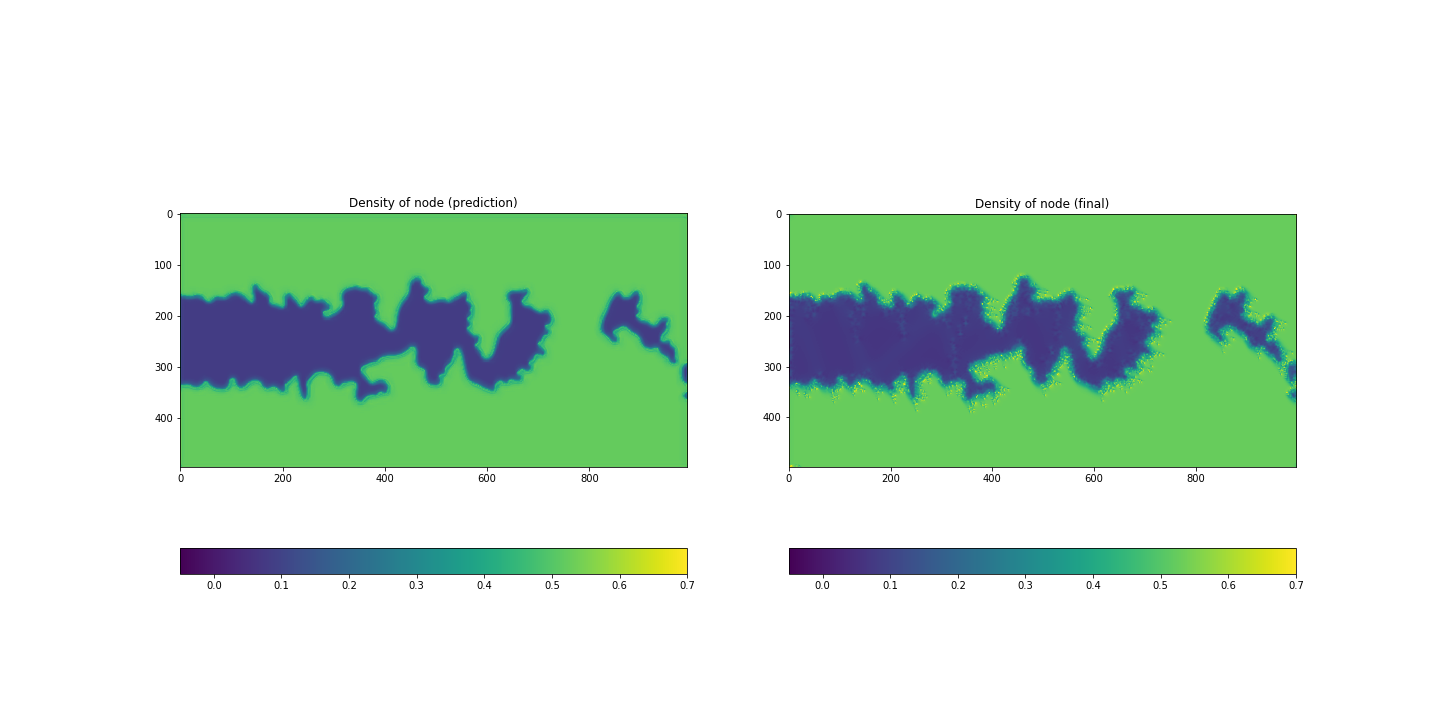 Neural network for the prediction

Fig.6 shows the configuration of the implemented network. This type of network is called UNet, which was named after its U-like shape of encoder-decoder network for semantic segmentation (see also A Beginner’s Guide to Neural Networks and Deep Learning). It was originally designed for biomedical image segmentation. The network used in this tool has only two layers for each side (encoder-decoder). The size of the images for the input varies depending on the case. To handle this, a section of 256x256 is truncated from the original images and used as the input images. The location of this section is randomly chosen in the domain. 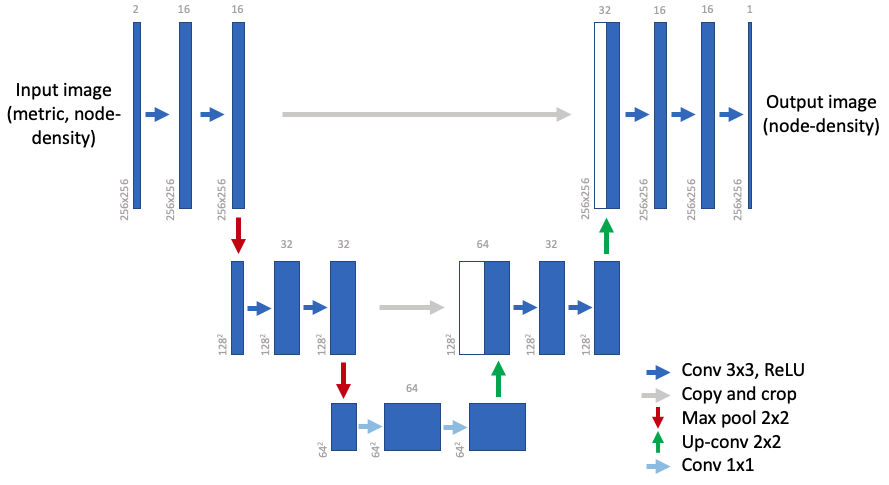 Fig.6 Neural network for the prediction

Although a wide variety of mesh-adaptation of different kinds of simulation would be an ideal data-set to train the neural network, it doesn’t seem realistic to collect the data-set by such way. In stead, we used a fire-flame simulation and generated a few hundreds of meshes which are different from each other. A simulation of droplet-evapolation is also used to generate a data-set in order to diversify the data-set for the test.

Those simulations are time variant (= unsteady), which means that the shapes of the flame and the droplet-evapolation vary in time. The mesh is constant but the simulation result changes every step of simulation. Now if we run an adaptation of Tékigô on a set of simulation results and the mesh of each instant, we would get a data-set of which each elements differs in theory.

Let’s just look at how we generated the data-sets to understand this. Fig.7 shows the strategy to generate the data-sets. For example, the flame case for the training and the validation were generated from 6 different instants of the simulation. On every one of 6 instants, the adaptation was done on 3 variables and 4 target-numbers with 4 steps to get to the target (the adaptation generates a mesh at each step of the loop, see Fig.4 in our blog of Tékigô for this inner loop). The initial mesh is of 131841 nodes. Finally this makes 6 x 3 x 4 x 4 = 288 cases of adaptation. Data-sets for the two tests were done by such process.

Fig.8 shows the overview of the data for the training, the validation and the test

Fig.8 Overview of the data for the training, the validation and the test

We use exactly the same UNet-type neural network as described in Fig.6, and train them on the data-set generated in the previous step. The data augmentation based on partial extraction was used. This allows to truncate a part of a whole original image. By this we get multiple (but in truncated size) images from the original images. 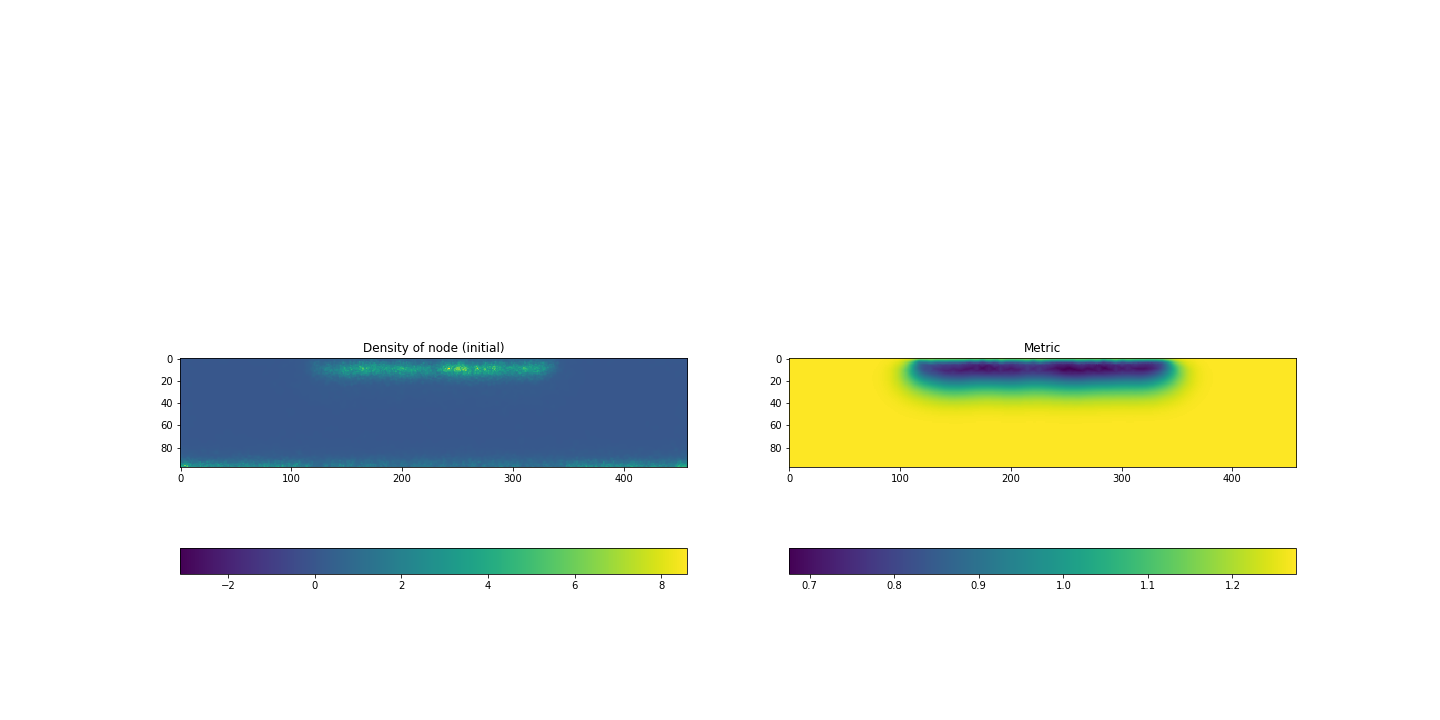 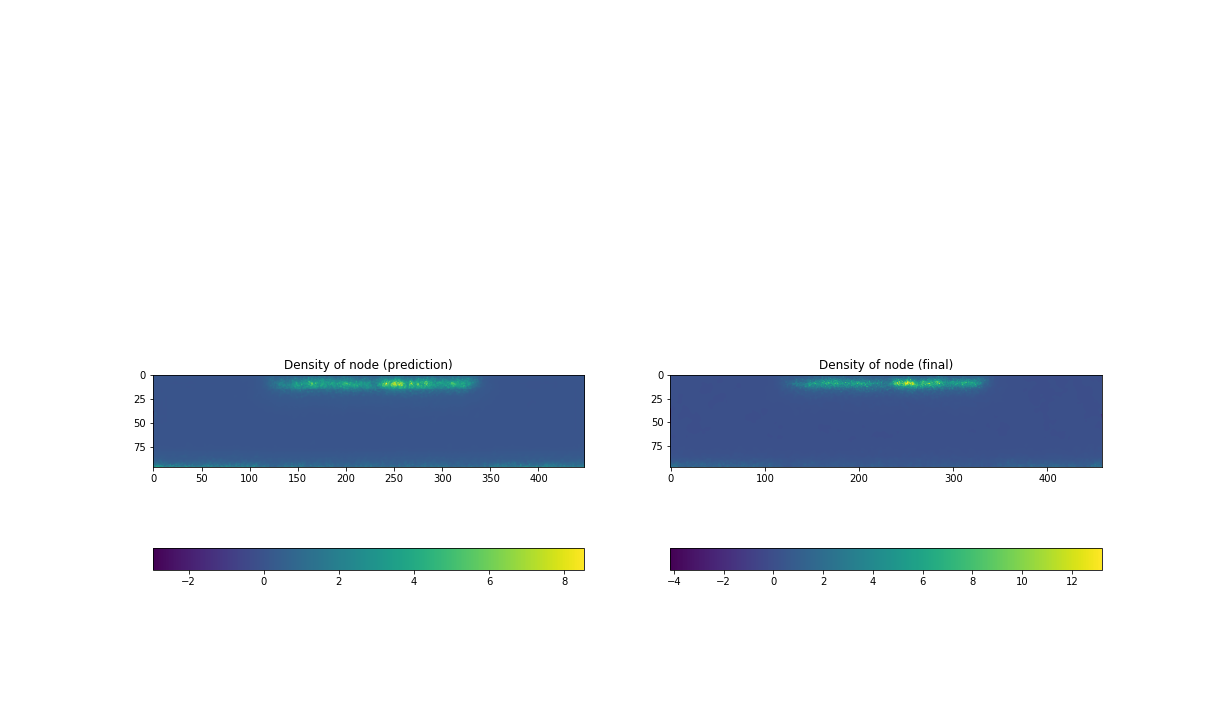 A comparison on the node-number calculated from the images give us a clearer view on the performance of our prediction. The following table shows the errors of the preditions by our newral network to the real node-numbers of refined meshes. In a general sense, our neural network TDL give largely better results on all the types of data-set.