This is the part 1 of a step-by-step training on scientific programming with python. The target audience is first-years in engineering schools. There is no pre-requisite skill.

This training is usually done in groups with a trainer. However you can probably use most of this material for self teaching.

The actual definition is the process of preparing an instructional program for a device (such as a computer) (Merriam-Webster).

During these lessons, we will often use the analogy of a cooking recipe:

A striking aspect of recipes/programs is that many versions can reach the same result:

On this last point, Readability matters a lot. Your hand-written recipes folder is fine for you, but if you want to share it to friends, you probably rewrite it. If you want to sell it, you have to comply to the cookbooks standards (Glossary, Ingredients, Pictures).

In a nutshell, programming is more a craft than an art or a science. Like any craft, you cannot learn without doing…

You will try now to run you first python program.

Use an editor to create a file babysteps.py with the following content

Ah yes, you need and editor…

You will spend a lot of time in the editor from now on, so invest a bit of time into choosing and lerning more about your editor. Many are possibles

Editors are also a matter of personal taste. Beware, there has always been an editor war, and pushing your champion can sent you into endless discussions, in other words pure time loss. For beginners, the author would maybe suggest Sublime, because it feels (IMHO) like a normal text editor at first.

Run the program with the python interpreter

We will use the basic interpreter of python. Try out the following command:

If you get only a Python version 2.X, try:

You have no python installed. O-kay, do not panic!. Install python using the official python ressource.

On most Unix installations, you can simply try:

If you did manage to launch python. Use quit() to exit the session.

Now run your program this way:

We will try a more interesting program with printing, conditions, loops:

This is now more looking like your usual programming routine. You can play a while with these lines and see what happen. Feel free to change the indentations, spacings, order, etc… and see what the Python interpreter makes of these changes.

Indentations are essential to python, as they defin blocks. You can read more in this indentation tutorial. You need to remember only this:

Suppose you need, for your business, a model of virus contamination in a population. A small search on the web (keywords : model, epidemiology) will probably lead you to the Compartmental models in epidemiology. The simplest one is apparently the S.I.R. model.

Now we search an implementation of the S.I.R. model in python (keywords : model, SIR, python). We find for example this blog article including sources. The raw sources are the following:

It should give you the following result: 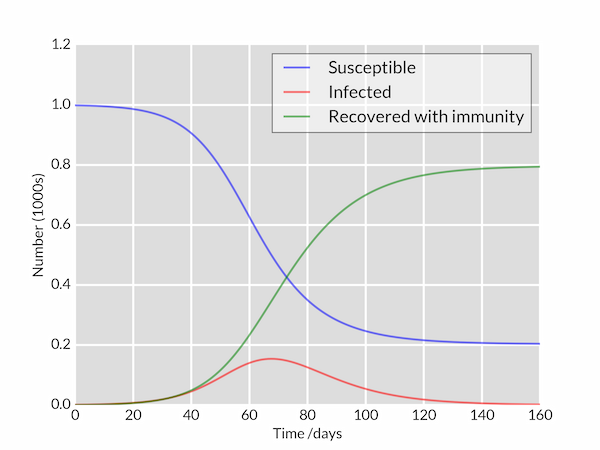 If you encounter an error of the type

Simply install the missing module with

You may need to read the next section “Environment and Packages” if you encounter problems at this point.

Rewrite the code to make it readable

The sources codes you will find on the internet are of heterogeneous quality, to say the least. In this step, we will rewrite without changing the piece of code.

In python, the tool pylint gives a score on readability. Install it and try it:

Readability is fully defined by the PEP008 standard in python. Do not mind too much about it, tools will tell you what to do. Simply put, having a score of 3/10 means this code is a bit hard to read.

Now we rewrite the code in a more edible form. Make a copy en edit this copy with your preferred text editor.

In this second version, the code is longer.

Note: we used blackto take care of all the spacings and indentation stuff:

The pylint score is about 8.53 now. What is interesting now is the following. The sir_diff_eq is rather easy to read, and the plot_pandemy is not related to our problem. We can only focus on the function sir. This last function is only 6 statements long.

The real difficulty is the resolution done by odeint(), which comes from scipy. Let’s search documentation about it (keywords: scipy, odeint). We land on the scipy documentation resource where you find an extensive explanation of the magic.

Now this new code will should easier to handle if you want to change the resolution, the case studied, or the equations themselves.

No we can go further. You need to change this code to represent, not a small flu at school, but a real pandemic with several waves of contaminations. It is time to rack your brains folks!

Try to take into account a social distancing period of 40 days (contact rate = 0.02) each time the relative proportion of infected people reaches 5% of the population. The result should look like: 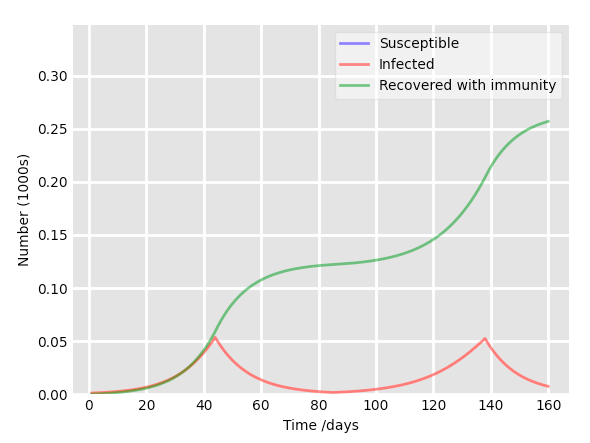 During the previous example, we had to rely external Python packages : numpy, scipy, matplotlib. One of the strongest points of Python is the ease to include external packages to you execution environment. You should probably have a look at the Python package Index pypi.org. All these packages are for free, and you can find almost anything.

Try for example the keywords sir, model, epidemiology and see how many teams provided their tools to the community. These guys are actually competing for the most attractive and easy to use solution, through eye-catching readme and extensive documentation (epipack, covid-seird). If after this you are still thinking of re-writing your own SIR model from scratch, you are affected by the Not Invented Here syndrome, a common disease among programmers.

How do I get a package?

To get a package into your python3 environment, use pip. Remember simply three commands:

… will install numpy to your current python environment

… will remove numpy from your current python environment

As you will install packages for each project, your python environment will grow, and you can get stuck. For example projet A need scipy 1.5.4 maximum, while project B need scipy 2.0.0 at least. (These numbers means the two versions are not equivalent).

Therefore it is good practice to keep your environment under control by creating virtual environments (venv). You can read our basics on venvs to get to the point faster.

Some packages need special care. For example, Tk) is a very common library used for for graphical interface. It is not available on PyPI, you need a more Unix-like way of installation:

The famous plotting package matplotlib, is also asking for graphical backends that are not on PIPy. On your first use, if nothing is available, you will get this kind of error:

Simply install the Tk backend to be sure you have one. You can read more on matplotlib backends on the dedicated documentation on backends