It is nowadays well established that aviation impacts climate through CO2 and other atmospheric greenhouse gases (GHGs) emissions, and reflection/absorbance of solar radiation. Current estimates suggest that the aviation sector represents approximately 5% of the total anthropogenic radiative forcing. This quantity may strongly increase given the observed growth of around 2% per year of the aviation sector, and a doubling of the world fleet projected for the next two decades. While the CO2 contribution emitted by air transport is known with relatively good precision, significant uncertainty still remains regarding the other impacts of the aviation sector. In particular the formation of contrails (condensation trails) has received a recent attention, since the most recent evaluations show that the radiative forcing induced by contrails could be of the same order of magnitude as the one induced by CO2 rejection from kerosene combustion.
While the impacts of air transport on climate have received substantial and on-going attention in the research literature, much less has been done on the climate change impacts on the aviation sector. The impacts of climate change on aviation are multiple: climate modelling studies have shown that increasing temperatures will decrease the air density and consequently the lift generation, leading to longer take-off distance and lower climb rate. It has also been shown that changes in atmospheric conditions in the upper troposphere can impact the duration of long-haul flight routes. Moreover, as a consequence of differential changes in the vertical structure of atmospheric temperature, clear sky turbulence is projected to increase through the 21st century. The climate change impacts on aviation are currently not very well understood and need to be better investigated and quantified, since climate change may impose additional risks and costly adaptation on air industry and transport. This is a relatively new and promising topic with many open questions. 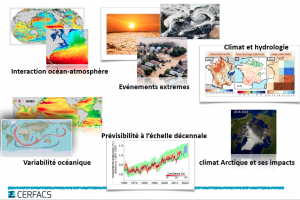 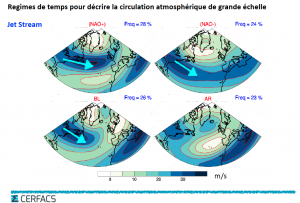 The evaluation, understanding and quantification of the impacts of i) air transport on climate and ii) climate and its change on air transport require a multidisciplinary approach, including researchers from different disciplines (climate, CFD, aerodynamics) that will combine different tools (climate models, CFD models). 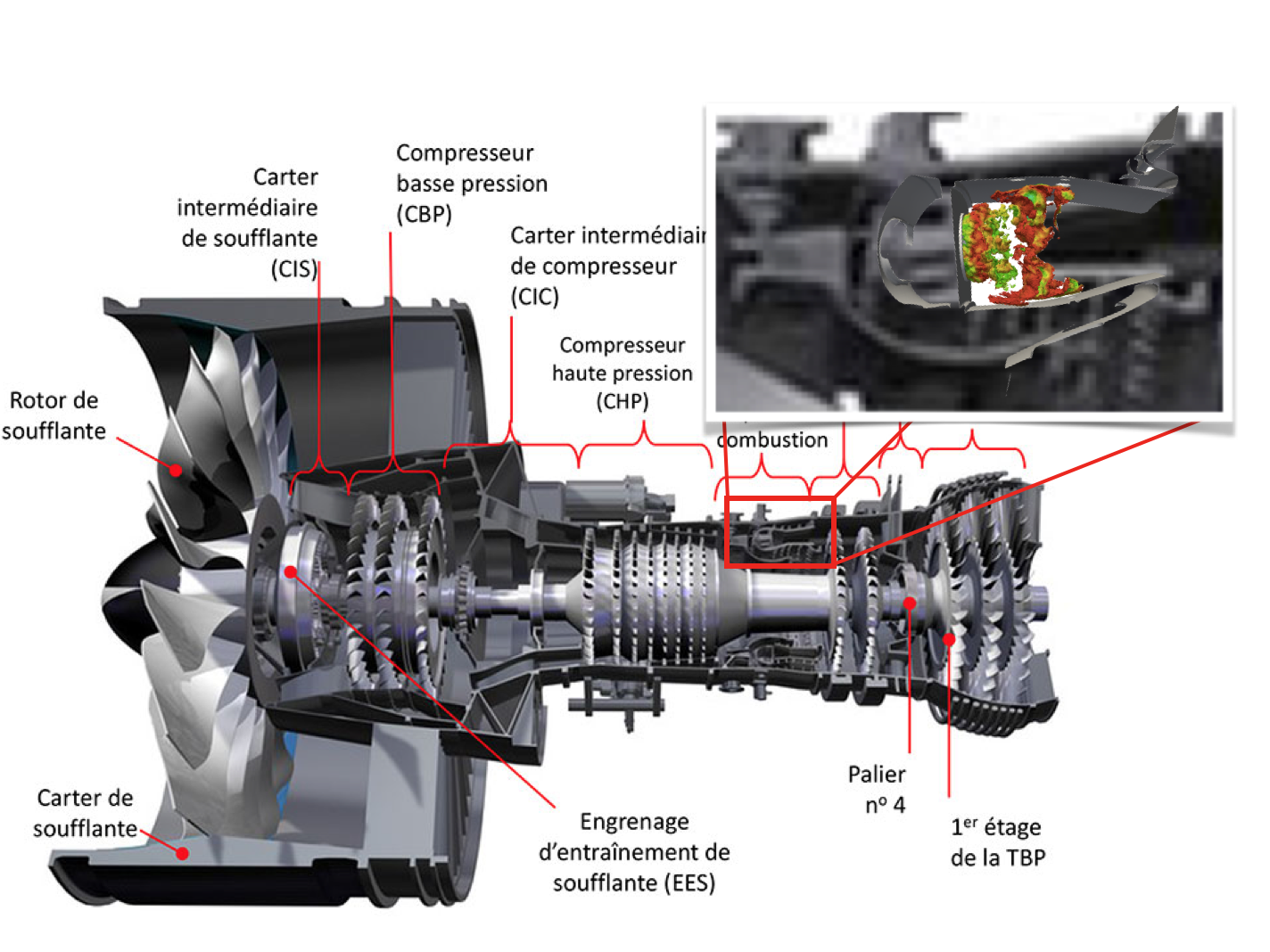 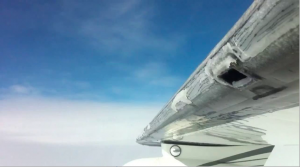 The CERFACS, in collaboration with Météo-France/CNRM, ONERA and other national research laboratories (LMD, IPSL) has contributed to the development of new methodologies and improvement of atmospheric and chemistry models to study the impact of air transport on climate (IMPACT and TC2 projects). Our next objective will target a better understanding and quantification of the contrail contribution on the atmosphere radiative forcing.

CERFACS has also undertaken the study of impact of climate change on air transport by leading the ICCA project funded by the STAE foundation. ICCA is a multidisciplinary research team bringing together climate and CFD researchers from CERFACS and other research laboratories (Meteo-France, ENAC, ISAE, ONERA) and private companies (AIRBUS). We have started a multi-disciplinary PhD thesis to study the impact of the future evolution of high temperatures on take-off performance, by using state-of-the-art climate simulations at high spatial resolution and simplified combustion models. We have also submitted to the DGAC a new proposal, TEMPEXTRA, to evaluate the numerous impacts of extreme high temperatures in the airports from a multi-disciplinary perspective. We will consider different airports and AIRBUS aircrafts. Our aim for the next years is to go further and to combine climate conditions with simplified engine models and more complex combustion models (AVBP) to assess the impact of climate change on engine performance and pollutants emission. Indeed, air transport has also an effect on air quality, in particular over the airports and nearest areas. The assessment of local air pollution due to air traffic is an important issue from the standpoint of human health. Under high temperature conditions, aircraft takeoff may lead to an increase of pollutant emissions such as NOx, CO or soot. CERFACS in collaboration with ONERA and INERIS actively participated in the MOSIQAA project, funded by the DGAC, whose aim was to i) better characterize and quantify the impact of emissions at local and regional level, and ii) to determine the links between atmospheric conditions and pollution peaks in a case-study airport and surroundings. The outcomes of MOSIQAA can be used in the context climate change to evaluate the links between the aircraft emissions and air quality. 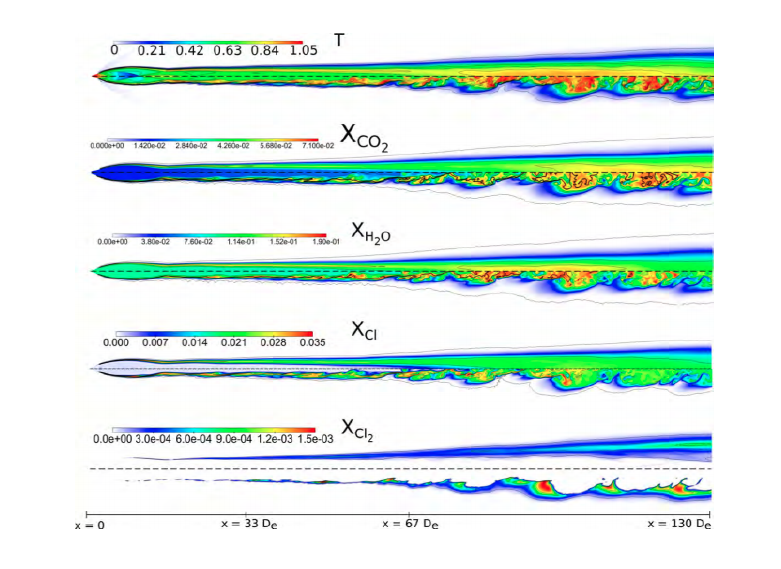 Work within the CLIMAIR theme requires strong interactions with the Coupling, Exascale and AI/Data Science and UQ strategic axes at Cerfacs, and with external partners. In terms of shareholders, we will pursuit our tight collaborations with Météo-France/CNRM (climate and chemistry modelling and observations), EDF (statistical tools to characterise climate phenomena, in particular extreme events) and ONERA (air quality). We have also started new collaborations with AIRBUS. Within the ICCA and TEMPEXTRA projects, we have enhanced our collaborations with other research institutions in Toulouse  (ISAE, ENAC).

The video presentation of the NextSim project has just been released : CERFACS is involved in the NextSim project (). The primary objective is to increase the capabilities of Computational Fluid Dynamics tools on extreme-scale parallel computing platforms for aeronautical design. This project has received funding from the European High-Performance Computing Joint Undertaking (JU) under grant agreement N° 956104. The JU receives support from the European Union’s Horizon 2020 research and innovation programme and Spain, France, Germany. This project has received funding from the Agence Nationale de la Recherche (ANR) under grant agreement N° ANR-20-EHPC-0002-02. For more information, please visit Read more