The CFD team at CERFACS develops a wide range of software tools for fluid flows, with or without chemical reaction. The major codes are listed below: 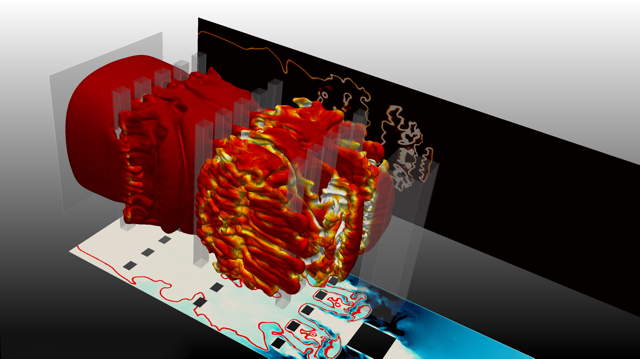 Explosions in building: LES with the high-fidelity solver AVBP on an INCITE machine: 1 billion cells. A premixed flame propagates from the left to the right side of the picture and increases speed when it meets obstacles and generates turbulence. See many more examples and movies here. in the field of combustion and turbo machinery

AVBP is a LES (Large Eddy Simulation) code dedicated to unsteady compressible flows in complex geometries with combustion or without combustion. It is applied to combustion chambers, turbo machinery, safety analysis, optimization of combustors, pollutant formation (CO, NO, soot), UQ analysis. AVBP uses a high-order Taylor Galerkin scheme on hybrid meshes for multi species perfect of real gases. Its spatial accuracy on unstructured hybrid meshes is 3 (4 on regular meshes). The AVBP formulation is fully compressible and allows to investigate compressible combustion problems such as thermoacoustic instabilities (where acoustics are important) or detonation engines (where combustion and shock must be computed simultaneously).

AVBP is a world standard for LES of combustion in engines and gas turbines, owned by CERFACS and IFP Energies Nouvelles. It is used by multiple laboratories (IMFT in Toulouse, EM2C in Centralesupelec, TU Munich, Von Karmann Institute, ETH Zurich, etc) and companies (SAFRAN AIRCRAFT ENGINES, SAFRAN HELICOPTER ENGINES, ARIANEGROUP, HERAKLES, etc). It is also used as a usual benchmark code by many computing centers to test their machines. The code is managed using specialized tools: git for source management, Redmine to track users experience, bi annual release of new versions. 100 to 200 users work with AVBP in Europe and hundreds of different configurations are computed every year.

AVBP is also used today to compute turbomachinery (compressors and turbines) and to compute full engine configurations. Being able to compute simultaneously the compressor and the chamber of the chamber and the turbine or all three is now possible with AVBP. This is critical for multiple problems such as new propulsion concepts (such as Rotating Detonation Engines) or to study coupled phenomena such as the noise emitted from a gas turbine.

AVBP has always been at the forefront of HPC research at CERFACS: its efficiency has been verified up to 250 000 cores with grids of 2 to 4 billion cells. This was done through multiple PRACE (EUROPE) and INCITE (USA) CPU time allocations. This requires a continuous work on the code architecture itself. CERFACS collaborates with INTEL through an IPCC  to continuously increase the performances of the solver. Collaborations with IBM and NVIDIA are also frequent. Starting in 2019, CERFACS will be a member of the Excellerat Center of Excellence where AVBP developments will be intensified.

AVBP was the baseline code for the European Research Council advanced grant on thermoacoustics lead by IMFT and CERFACS: INTECOCIS (http://intecocis.inp-toulouse.fr) which finished in 2018. It is now the main code used by CERFACS, SAFRAN TECH and SAFRAN HELICOPTER in two ITN Marie Curie projects focusing on instabilities and ignition in annular chambers: ANNULIGHT coordinated by NTNU and MAGISTER coordinated by Un. Twente.

JAGUAR is a new high-order method developed at CERFACS and based on spectral difference techniques. It can offer very high orders of accuracy (4 to 8) on arbitrary meshes. Jaguar is developed jointly by CERFACS and ONERA to build a high-order tool for combustion and more generally for energetic applications.

elsA is a software owned by ONERA and co developed for certain aspects by CERFACS. For example, for aircraft aerodynamics or for turbo machinery, CERFACS develops certain aspects of elsA and applies this tool to various design problems.

Formal Session 2022 of the Air and Space Academy Friday, December 9, 2:00-6:00 pm   📌 in person at the Salle des Illustres - Mairie de Toulouse  💻 and in visio  ✅ Mandatory registration (face-to-face or visio):   During the formal public session of the Air and Space Academy 2022, which will take place on Friday, December 9, starting at 2:00 pm, Salle des Illustres, Hôtel de Ville de Toulouse, in face-to-face and remote sessions, the Vermeil Medal will be awarded (at 5:15 pm) to Carlos PÉREZ-ARROYO, Jérôme DOMBARD, and Gabriel STAFFELBACH to honor the excellence of their work in the realization of the FULLEST project, the first high-fidelity simulation of an aircraft engine.    Read more

The work of CERFACS, in collaboration with SAFRAN, on the hybridization of physical simulation software with machine learning techniques, has been cited in the magazine l'Usine Nouvelle, and is included in a detailed write-up called "Simulation and machine learning combine their strengths" in the magazine Industries et Technologies this month. This work, supervised at CERFACS by Corentin Lapeyre, and at SAFRAN by Stéphane Richard, is at the forefront of developments in terms of exploiting artificial intelligence tools for the simulation and design of physical systems.Read more