The monitoring of environmental systems relies on high-fidelity simulation capabilities in combination with data-driven modeling approaches such as data assimilation, uncertainty/sensitivity analysis and more generally machine learning. Combining physical and data-driven modeling approaches is a very active field of research at CERFACS for a wide range of applications associated with environment and safety issues.

Data assimilation for global-scale atmospheric composition around the MOCAGE chemistry-transport model is a well-established activity at CERFACS, both in support of Météo-France operational forecasts and for computation of chemical re-analyses.

CERFACS contributes to the continuous design, implementation and validation of new methodologies specific to chemical data assimilation, for instance to account for model error within the data assimilation process and to directly assimilate satellite radiances in the infrared and ultraviolet spectral areas from instruments such as IASI and GOME-2. Such data assimilation capability provides a way to produce global re-analyses of trace gases using satellites for climate applications and to improve operational air quality forecasts.

This research is done in strong collaborations with CNRM/Météo-France and for instance as part of TOSCA/COPERNICUS research projects. 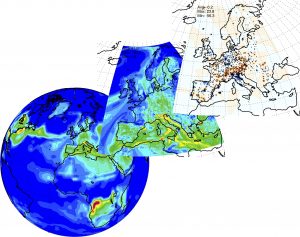 
Mapping pollutant concentration within the first tens or hundreds of meters from an emission point source occurring during major environmental disasters (industrial accidents or wildfires for instance) remains a simulation challenge. At the forefront of computational fluid dynamics, large-eddy simulations (LES) are a promising way to represent time and space variability of turbulent atmospheric flow and to assess public short-term exposure, especially in urban areas, industrial sites and mountainous areas.

CERFACS contributes to the emergence of LES for environmental flows by designing high-fidelity simulation capabilities based on AVBP and MesoNH (in collaboration with CNRM/Météo-France). Submetric spatial resolution can be used at CERFACS to represent the turbulent flow patterns and the dynamics of the plume at the scale of an event within the atmospheric boundary layer. New methodologies (multi-scale method, metamodeling and data assimilation for instance) are developed in combination with LES to design efficient and accurate tools. For instance, a coupled fire/atmosphere simulation capability has been designed and validated to represent the interactions between a wildfire and the atmosphere, and thereby the atmospheric feedbacks on the wildfire behavior. Data assimilation capabilities involving LES metamodeling and joint state-parameter estimation are being developed to produce the best possible representation of an event.

This research is done in collaboration with CNRM/Météo-France, ONERA and CEREA, and as part of national-to-European research projects (STAE, TOSCA, ANR, MSCA). Specific collaborations are pursued with INRIA and LISN on methodological aspects. The massive computations are performed on GENCI platforms and constitute excellent benchmarks to broaden the range of applications for the HPC tools of CERFACS. 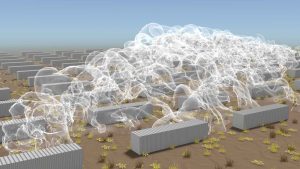 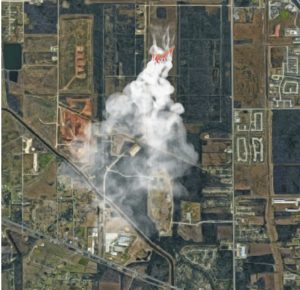 Estimating and forecasting the flow of rivers is an important issue for institutions involved in water resource management and in charge of civil security. To observe and understand the dynamics of river flows, we rely on a heterogeneous observation network consisting of in situ and satellite measurements. This network is enriched through the deployment of innovative instruments (in-situ stations, airborne measurements, UAVs, high-resolution altimetry, radar and optical space missions, …) on a local and global scale.  In addition to these observations, the water community uses numerical models that solve Navier-Stokes equations under various simplifying assumptions. Their capabilities are limited by several factors of uncertainty related to the description of bathymetry/topography, hydraulic or hydrological parameters or forcing terms such as hydrological inputs and precipitation. In order to overcome the limits of deterministic simulation, an ensemble approach is favoured. In this context, the impact of input uncertainties on the simulated and predicted variables is estimated with methods inherited from the field of uncertainty quantification. In order to improve the quality and lead time of forecasts, the main sources of uncertainty are then reduced with data assimilation methods. The computational cost related to the quantification and reduction of uncertainties must respect the computational limits of operational flood forecasting, thus, the use of a reduced model in place of the direct model is favoured. 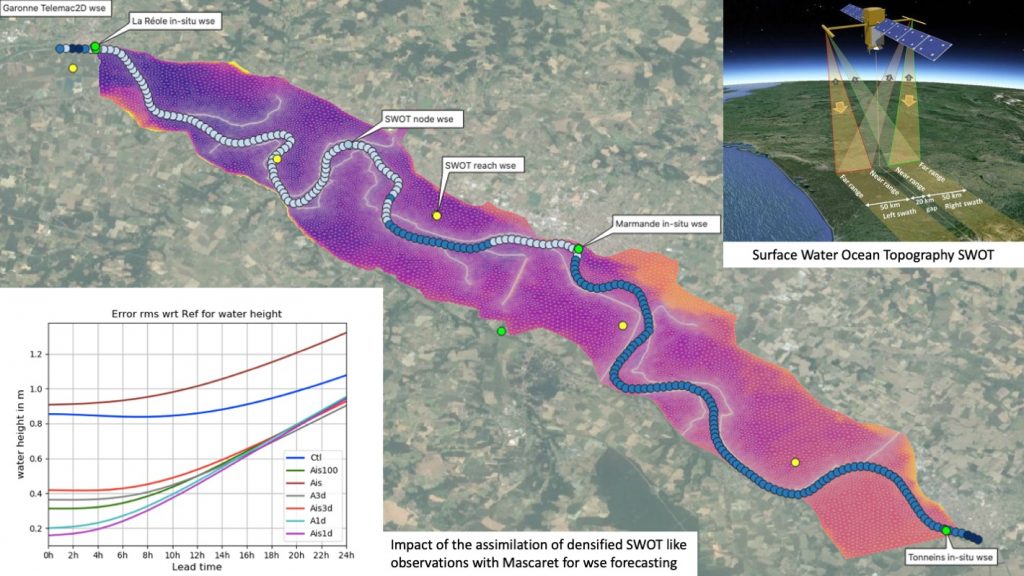 Data assimilation at CERFACS has its historical roots in physical oceanography, when CERFACS played a leading role in the early development of operational oceanography for Mercator-Océan. Ocean data assimilation underpins many research and operational applications in forecasting and climate reanalysis where accurate ocean state estimates are required for ocean and coupled models.

Central to the ocean data assimilation activity at CERFACS is the variational data assimilation system NEMOVAR, which is developed jointly by CERFACS, ECMWF, Met Office and INRIA. CERFACS contributes to NEMOVAR mainly through developments to the minimization algorithms, the balance operators, and the covariance operators used for representing errors in the background state and the assimilated observations. Making optimal use of ensemble forecasts to improve estimates of the background error covariances is another active area of research.

For 5 years, CERFACS has been conducting an innovative scientific program for gas explosions. This subject is an important field of study for many applications related to building and industrial safety. Today URANS codes such as FLACS are used to predict the consequences of accidental flame ignition in buildings, but these codes are based primarily on extensive experience and little on the deterministic and precise resolution of the Navier Stokes equations. More accurate methods such as Large Eddy Simulation (LES), coupled with the development of high performance computing, have the potential to predict very precisely the main characteristics of deflagrations in confined or semi-confined environments. 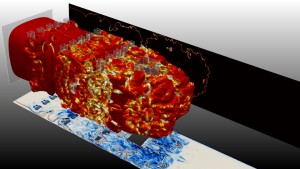 This work is carried out with the AVBP solver, and was initiated in quite simple configurations with relatively small dimensions. The LEFEX (LES For Explosions) project led by CERFACS in collaboration with Air Liquide, GRTgaz and Total aims to overcome this limitatiion to small-size domains by developing the models, numerical methods, algorithms and methodologies necessary to scale up the AVBP code to industrial-scale applications. The final objective of the project is to perform explosion calculations with AVBP under deflagration conditions in realistic geometries and therefore large dimensions. To achieve this goal, several paths are identified in the project, such as adaptative mesh refinement, turbulence-chemistry interaction modeling aided by data-driven approaches.