How to simulate, in the memory of a computer, the sequence of states encountered by the atmosphere, the oceans and land surfaces? This is the tremendous challenge undertaken by CERFACS scientists and engineers in order to understand the present climate and its future.

The method consists in expressing into computer language the Earth data (intensity of the sun radiation, rotation velocity, shape of the continents, ocean and atmosphere compositions…) as well as the physical laws (conservation of mass, momentum and energy, thermodynamics, radiative transfer…). Physical quantities such as temperature, winds or currents, humidity or salinity are represented by millions of numerical values on spatial three-dimensional grids covering both atmosphere and oceans. A set of evolution equations, denoted as “the model”, is used to make these fields progress on time steps of the order of a quarter of hour. The computer must be at least a thousand times faster than the real time in order to perform decadal numerical simulations of the climate in less than a month of elapsed time. 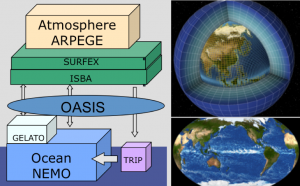 Figure: Model components of the climate system coupled with the OASIS coupler.

In practice, there exists several separate models to simulate each component of the climate system, such as ARPEGE for an atmospheric model, NEMO for an oceanic model, GELATO for a sea ice model, SURFEX, ISBA and TRIP for models dealing with land processes. In a first phase, these models are developed separately by research centres or teams focusing on specific topics. In a second phase, these models need to be coupled by exchanging data at their interface such as mass, momentum or energy fluxes. To achieved this task, CERFACS has developed the OASIS coupler, a software that ensures with the exchanges on massively parallel computers. This coupler is used worldwide in a large number of climate models.

In a third phase, the climate coupled model is run on the most powerful computers to simulate sequences of atmosphere, ocean and land states on decades or centuries. None of them can match exactly the sequences of weathers registered by meteorologist. Indeed, a tiny difference in the initial conditions leads to large differences in the atmosphere evolution after a period of the order of the month, due to the intrinsic chaotic behaviour of the system. But the objective is to recover the same statistical properties as observed, such as the mean temperature of a particular region at a particular month or the same variability between the cold and warm days. On longer timescales, climate scientists want the model to reproduce the natural variability of the ocean, such as the El Niño events, the cooling events following volcano eruptions or the global warming due to the increase of greenhouse gases. The goal is achieved through continuous improvement of physics and dynamics of all components of the model. The increase of the grid sizes, made possible thanks to the progress of computer capacities, helps a lot in this process.

When a model has proved its capacity to reproduce the observed climate up to nowadays, it can be used to participate to the scientific report of the Intergovernmental Panel on Climate Change (IPCC). The best climate centres of the planet join their efforts to answer several major questions such as the climate changes under various scenarios of greenhouse gas emission or the ability to predict climate one or several decades in advance. CERFACS is actively participating to these scientific and technical challenges, in collaboration with Météo-France.