The meeting will be held at Cerfacs, 42 avenue Gaspard Coriolis, 31057 Toulouse Cedex 1, France. 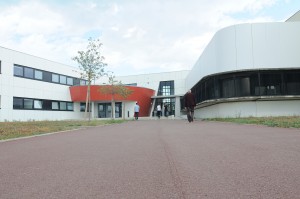 CERFACS is located on the campus of Météo-France, in the western part of Toulouse, at 7 km away from Toulouse downtown and at 8 km from Toulouse Blagnac Airport.

Easily reachable by bus and metro.

By taxi : from the Airport, a taxi can drive you to Meteopole in about 15 minutes

Airport shuttle and underground: about 2 hours

You can buy your ticket :

– At the bus station

– From the driver in the bus

Ticket is valid throughout the entire bus-underground network and the Airport Shuttle.

Take the subway  (line A) from “Jean-Jaurès” or “Marengo—SNCF” station to the last stop “Basso Cambo”.

With the same ticket to be punched again in the bus, take either bus number 18 (check that the direction at the front of the bus is “Cité Scolaire Rive Gauche”), then get off at stop “METEO-FRANCE”.

It takes about 20 minutes from downtown to Météo by metro and bus.

You can also get on bus number 21, which stops in front of the Motorola firm. The Météo France campus is behind you, at the roundabout.

A bronze medal to Cerfacs for “Allons-Y À Vélo” !

A bronze medal to Cerfacs for "Allons-Y À Vélo" ! Cerfacs is on the podium for its cycling regularity during the "Allons-Y À Vélo" period (May 25 - June 25) in its category (100-500 employees).During this period, 37% of Cerfacs employees came to work by bike during at least 4 consecutive days. "Allons-Y À Vélo" is a campaign organised by the association "2 Pieds 2 Roues" and "La Maison du Vélo de Toulouse" to promote the use of the bicycle for every day travels; all details can be found on allonsyavelo.le-pic.org . Cerfacs encourages its employees to use their bicycle to come to work as they benefit from the bicycle mileage allowance (FMD for Forfait Mobilité Durable) of up to 500 Euros per year.Read more

The H2OPE project wins the prize Joseph Fourier 2021 The prize, launched by Atos and GENCI, aims to reward the work of researchers, academics and industry in two strategic areas: Advanced Computing (HPC, Quantum, Edge) and Artificial Intelligence, and, in the 2021 edition , gives particular importance to Decarbonation. The 1st Prize was awarded to the H2OPE or “H2OPErability for safe and clean gas turbine engines” project from CERFACS in Toulouse. This project aims, via the LES AVBP code, to model at high resolution a mixed combustion process associating conventional fuels with hydrogen (bi-fuels) as one of the most promising technical solutions to achieve "net zero emissions" of CO2 in the industrial sector. It was presented by Walter Agostinelli, Davide Laera, Laurent Gicquel, and Thierry Poinsot. Press release :Read more