The development of coupling softwares is one recognized area of CERFACS expertise since the first release of the OASIS coupler in 1993, which specializes in coupling components of the Earth System. CERFACS expertise in code coupling is further reinforced with the development of the more generalist OpenPALM coupler, which main difference with respect to OASIS is the dynamic launching of the coupled components as well as the generic interpolation between different type of grids thanks to the CWIPI library developed by ONERA.

Beyond those technical developments, CERFACS is also involved in different projects on coupling methods, with the work on inconsistencies in the representation of the ocean-atmosphere interface, on hydrological multidimensional coupling as well as in Computational Fluid Dynamics for multi physics and multi component coupled simulations.

The OASIS coupler is an open source software developed at CERFACS to couple numerical codes modelling the different components of the Earth System. OASIS3-MCT provides fully parallel coupling including parallel matrix vector multiplication for the remapping and parallel exchanges of coupling fields, using the Model Coupling Toolkit (MCT), developed by the Argonne National Laboratory (USA), as a lower layer.

The main qualities of the OpenPALM coupler are its easy set-up, its flexibility, its performances, the simple updates and evolutions of the coupled application and the many side services and functions that it offers. The OpenPALM coupler is composed of three main elements: PALM, CWIPI and PrePALM.

PALM (Projet d’Assimilation par Logiciel Multimethodes) has originally been designed for oceanographic data assimilation algorithms, but its application domain extends to every kind of scientific applications. The main features of PALM are the dynamic launching of the coupled components, the full independence of the components from the application algorithm, the parallel data exchanges with redistribution and the separation of the physics from the algebraic manipulations performed by the PALM algebra toolbox. It can be defined as a dynamic coupler for its ability to deal with situations where the component execution scheduling and the data exchange patterns cannot be entirely defined before execution.

CWIPI (Coupling With Interpolation Parallel Interface – ONERA) aims at providing a fully parallel communication layer for mesh based coupling between several parallel codes with MPI communications.  Coupling is made through 1D, 2D or 3D exchange zones that can be discretized in different ways in the coupled codes with an unstructured description. CWIPI functionalities involve the construction of the communication graph between distributed geometric interfaces through geometrical localization, interpolation on non coincident meshes, exchange of coupling fields for massively parallel applications as well as visualization file building.

OpenPALM applications are implemented via a graphical user interface (GUI) called PrePALM. In this interface, the programmer initially defines the coupling algorithm: number of components, sequential and parallel sections, loops and conditional executions, resources management. Then he describes the actual communications between components. Options about synchronization, memory management and parallel computing can be set at this level and they allows the implementation of effective and flexible applications.

Representation of the ocean-atmosphere interface

CERFACS also contributes to improved representation of air-sea interactions in coupled models, working in particular on inconsistencies linked to the discretization in space and in time. In space, physical inconsistencies result from the difference in the numerical grids used by atmospheric and oceanic models; the work on this theme involves the concept of an “exchange grid“. In time, current asynchronous coupling algorithms do not allow for a correct phasing between the ocean and the atmosphere, and hence between their diurnal cycles, potentially inducing biases in the estimation of daily maxima.

One way to have a consistent interface is to implement Schwarz iterations while coupling the models. The principle of the method is to repeat each coupling period many times, with the same initial condition for each iteration, but with boundary conditions calculated by the other model for the same period during the previous iteration. This is repeated until convergence of the surface variables and fluxes.

Schwarz iterations have been implemented in simulations using CNRM-CM6-1D, a single-column version of CNRM-CM6-1. Runs of one day with coupling periods of 300 s, 3600 s, 3 hrs, 6 hrs and 12 hrs. were realised.

Improvement of the diurnal cycle of the Sea Surface Temperature (SST) with Schwarz iterations.

Multidimensional coupling in hydrodynamics is an active field of research at CERFACS. It aims at reducing the cost of complex flow simulation combining 1D and 2D submodels in place of using a full 2D model. Indeed, the lack of bathymetry/topography data and the computational cost constraints limit the extensive use of 2D models for operational flood forecasting. Multi- dimensional coupling offers an appropriate solution with 1D models where the flow is mono-dimensional and with local 2D models where needed. Different coupling strategies are investigated depending on where the coupling interface is located with respect to the 1D and 2D submodels.

Lateral coupling features a 1D model in the river bed and activated 2D models in flood plains when the river overflows. The coupling algorithms stands in considering variables between the 1D and 2D models as boundary fluxes for the 2D model and source terms for the 1D model. Longitudinal coupling features 1D models where the flow is 1D that exchange boundary conditions with 2D models in region where the flow is 2D, for instance for confluences. The continuity of the hydraulic variables across 1D/2D boundaries is preserved using an iterative Schwarz algorithm. This research is carried out in collaboration with LHSV, EDF, ARTELIA and INRIA with the Telemac Software. 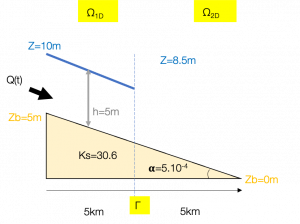 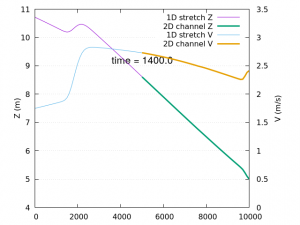 Longitidunal coupling at boundary condition with Swartz algorithm between 1D and 2D submodels for a rectangular channel. Barthélémy et al., 2018.

Today, the design of gas turbines requires to consider strong interactions between different physics as well as the components of the engine. As a result, integrated simulations involving multiphysics and multicomponents are performed both at the research level as well as in industries. With the constant increase of computing power, numerical simulations of the interactions between the compressor, combustion chamber and turbine, as well as of the thermal interaction between fluid flows and solids offer new design paths to diminish development costs through important reductions of the number of experimental tests. In these fields, the main idea is to jointly simulate the different parts of the coupled problems with a high level of fidelity limiting hypotheses on the boundary conditions:

Recent works have shown the ability of eddy resolving methods such as Large Eddy Simulation (LES) to provide reliable results in the contexts of combustors and turbomachinery. Using an unsteady LES flow solver to resolve such problems raises several complexities to address in the context of coupled problems. Indeed, LES requires high mesh resolutions to accurately capture the flow physics and is more CPU consuming than averaged methods to converge spatial and temporal statistics. These specificities imply to use high performance architectures to decrease the restitution times of the simulations.

The use of LES also implies some specificities for the treatment of both coupled problems. Concerning conjugate heat transfer, CERFACS has worked on dedicated methods to accelerate the convergence of long thermal transient in solid while benefiting from LES accuracy as well as high performance computing in cases of steady thermal problems [Duchaine et al. 2009, Duchaine et al. 2013, Jauré et al. 2013, Duchaine et al. 2015, Errera et al. 2016, Berger et al. 2017]. When it comes to the treatment of rotor/stator interfaces for the simulations of an entire gas turbine engine, CERFACS has developed a coupling method in the AVBP code based on overlap meshes exchanging conservative variables that respects the LES requirements of the numerical schemes used in the solver [Wang et al. 2014, de Laborderie et al. 2018]. Based on these developments, we have recently developed a Local Time Stepping framework allowing to greatly reduce the CPU cost of unsteady simulations [Citations to come].