➤ Uncertainty quantification has now become a mandatory step in numerical sciences and modeling in a context where computational sciences are constantly increasing.

➤ The main idea is to quantify the uncertainty in the model outputs (called quantities of interest) that are due to uncertainties of various types in the model (aleatory and epistemic errors). These errors relate for instance to model parameters, initial conditions, boundary conditions or model equations.

➤ The classical methods for uncertainty quantification are based on the Monte-Carlo approach that allows to estimate the probability density function (pdf) of quantity of interest with respect to the pdf of the input variables that are considered as aleatory variables. These methods are computationally expensive as they imply a considerable number of model integrations. Numerous alternative methods (intrusive or non-intrusive) aim at building a surrogate model using a limited number of model integrations, which statistics and surface response can be estimated at a limited cost. 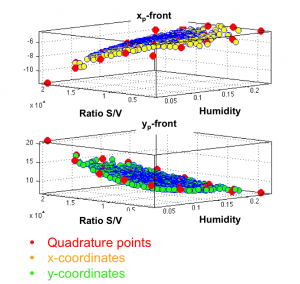 Response surface of the polynomial decomposition surrogate model for the fire front poropagation model with respect to the vegetation characterictics (humidity and surface/volume ratio). The quantity of interest is the (x-y) position of a marker on the fire line. PhD M. Rochoux, 2014. 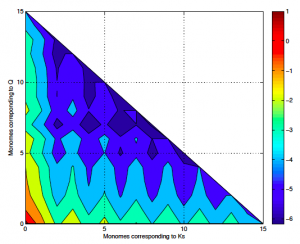 ➤ A platform dedicated to uncertainty quantification is under development in the framework of the dynamical coupling software OpenPALM using the OpenTURNS (EDF/EADS/Phimeca) library. This preliminary tool offers classical non-intrusive approachs for small to medium dimension problems involving a limited number of model integrations. It is designed for straigthforward use for applicative simple cases that are of interest for CERFACS and its shareholders.

➤ The development of advanced methods adapted to large dimension problems remain an open research field and a challenge for geosciences, combustion and aerodynamics that CERFACS is willing to tackle with.

Within the PRACE project FULLEST (First fUlL engine computation with Large Eddy SimulaTion), a joint collaboration between CERFACS, SAFRAN and AKIRA technologies, Dr. C. Pérez Arroyo (post doctoral fellow at CERFACS) has carried out under the supervision of Dr. J. Dombard the first high-fidelity simulation of a part of the real engine DGEN380 (for now, from the fan to the combustion chamber). This 360-degrees integrated large-eddy simulation contains around two billion cells on the three instances, carried out with the AVBP code of CERFACS.  The CPU cost is obviously large but still within reach, performing around one turn of fan during 5 days over 14400 skylake cores. Post-treatments are in progress and already show, among other complex phenomena, a strong interaction between the high pressure compressor and the combustion chamber (see forthcoming paper GT2020-16288 C. Pérez Arroyo et al). Below a video showing: in the fan an isosurface at mid-height of the vein colored by the Mach number, in the high pressure compressor a gradient of density, in the bypass of the combustion chamber the static pressure and in the flame tube a temperature field. One of the goals of the project is to create a high-fidelity unsteady database to study interactions between modules and may help other teams to develop new lower order models and/or validate existing ones. Beyond the feasibility and the maturity of the AVBP code, this kind of calculation is an important milestone for the aeronautical industry and would allow to apprehend earlier in the design the effect of integration and installation and thus, to reduce the cycle and therefore the cost of the future aircraft engines. We acknowledge PRACE for awarding us access to Joliot-Curie (Genci) hosted at CEA/TGCC, FRANCE, Safran Tech and DGAC fundings within the project ATOM, along with the invaluable technical support at...Read more

B. Cuenot distinguished as Program Chair of international Symposium on Combustion

ALL NEWS
We use cookies to ensure the best experience on our site.
If you continue to use the latter, we will consider that you accept the use of cookies. Check out our privacy policy I ACCEPTI REFUSELEARN MORE
Revoke consent