Definition of the domain

Climate modeling is to replicate more or less simplified the coupled behavior of the atmosphere, oceans and land surfaces at various spatial scales (from region to globe scales) or time (from season to century scales or more) . A useful tool for understanding the complexity of climatic phenomena is to numerically simulate the evolution coupled various components of the Earth system, after translating the physical principles governing the form of mathematical equations. CERFACS brings many strengths to meet this challenge by continuously improving the quality of these couplings, on more and more powerful computers , and analyzing in depth the results of many simulations it performs.

The intrinsic climate variability, from monthly to decadal scales, overlaps the global warming resulting from human activities. Detection of climate change and their allocation to various causes is a scientific problem that requires combining Earth observation, modeling of coupled and complex physical phenomena and scientific computing.

Cerfacs actively contributes to the IPCC exercises (Intergovernmental Panel on Climate Change) which regularly publishes a detailed report on the present climate and its projection throughout the century. Advances in climate modeling, in particular through the intensification of Earth observation and increasing computer power, reduce uncertainties in climate projections.

Research areas conducted in CERFACS through climate modeling are: 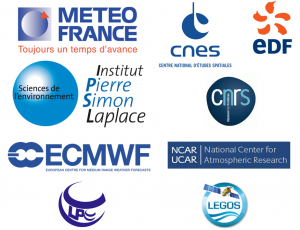